COMMENTARY: The Trials and Tribulations of Bathroom Etiquette

I just celebrated, to use the term loosely, my 59th trip around the sun. Another birthday has come and gone. I must admit to mixed emotions about aging at this point. Many people go through a period of reflection and even depression when they hit 60. It is coming a bit early for me because our Tribe recognizes the age of elder statesperson-ship as 59.5 years of age. So, in a few months, I will be considered an elder. There are many people who will tell you that there is a difference between being an elder and a tribal elder. I thought it was only a matter of whether I was a member of the Tribe and had reached the age. Some say there is a job description that you must fulfill. I am not sure what the difference is or will be for me, but I am looking forward to finding out with some trepidation. It is certainly starting to feel more awkward as I find myself relentless marching toward the age of elder accountability.

Speaking of awkward, I would like to share some thoughts on mixed-use bathrooms. Generations of thought have gone into our various behaviors. While we like thinking of ourselves as a forward-thinking, progressive Tribe and people, I feel that there are some areas that are better left alone. Coed bathrooms may be one of them, speaking as a man of advanced age.

A unisex sign hangs outside of the bathroom in the Ginger Lynn Welch Complex. (ROBERT JUMPER/One Feather photos)

I was always a little puzzled with the concept. For example, I am old enough to have used an outhouse. Most folks have graduated to indoor plumbing these days, but, back in the day, people in our mountains used to dig deep holes in the ground and build a wooden structure over the hole with a seat, also with a hole in it, to use as a restroom facility. Most of these facilities did not have climate control, so winter use of the outhouse had its challenges, while summer use had a separate, but an equally daunting set of issues. I once visited a neighbor who had an outhouse with three “seats.” Three seats? I pictured family members, or a mixture of family and friends, in positions of great compromise chatting about the business of the day while corporately doing their “business.” Pictured it, but I could not imagine a way in which I would feel comfortable participating in that gathering.

We, along with North Carolina, and other states in the U.S., have had great debates about the legality of men in women’s restrooms and women in men’s restrooms. North Carolinians even lost a Bruce Springsteen concert (and some basketball games) with old Bruce swearing to not come to North Carolina again because we were somehow mistreating a gender – I think-by saying that they couldn’t or shouldn’t use a restroom designated for a particular “other” sex.

On one side of that debate, you had people saying it is a safety and public health issue. On the other hand, you had people saying it was a gender rights issue. Now, I must admit that not having to hear Bruce growl and strain through what he calls singing didn’t have much impact on my preference in this matter. Frankly, based on recent experience and concern for public safety, I would probably wonder why we are changing what is working.

But here is what I know. We, at the Ginger Lynn Welch (GLW) Complex, have been part of a grand experiment, purely by accident. Due to some program changes in the GLW several months ago, there was a need to modify facilities, including restroom facilities. A full set of restrooms (the men’s room) had to be converted to private use. What had been the women’s room was converted into a “coed” public restroom. To say that conversion has been a study in vanity and humility would be an understatement. This restroom has four commodes or stalls. As part of the transformation, a deadbolt lock was also placed on the entry door. I thought this was weird. After all, we are a progressive Tribe who should be okay with different genders using a single facility. There are, indeed, individual privacy stalls to afford a level of privacy for each user with this public restroom. I soon came to understand that stalls were not the level of privacy that the public, or least the general GLW public, was accustomed to when using a coed bathroom; thus, the deadbolt. 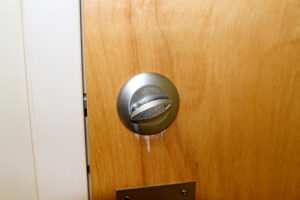 A deadbolt on the unisex bathroom in the Ginger Lynn Welch Complex allows users to lock the door from the inside.

The deadbolt lock is almost exclusively used when any person, regardless of gender, visits the “coed” restroom. An auditor would be shocked at the inefficiency of one person tying up four commodes in one visit. This locking of the door also makes going to the restroom a bit of a game of Russian Roulette. You see, the other set of restrooms in the GLW is across the building and, at various times of the day, are closed for cleaning. So, when the need to use the facilities approaches, many of us start the calculations before making the journey. There is no sense of urgency like getting to one end of the building or the other and finding out that you picked the wrong set of restrooms.

And, there is the question of proper etiquette when one finds the deadbolt unlocked, but when you push the door open, you hear movement inside a stall. Do you quietly and discretely back out of the room and start the long journey to the other side of the building? Do you proudly proceed into the room, assuming that the occupant is a fellow progressive who cares not with whom or what gender they share a restroom? And, isn’t all this decision making a little more stress than you need at a time like that?

I have had my share of experiences with unisex bathrooms. That is, in essence, what an outhouse was. You didn’t see doors to outhouses, typically, with “men” and “women” carved neatly in the wooden door under the crescent moon. Folks were ok with that because, usually, outhouses served one customer at a time. The neighbor’s multi-seat outhouse was a challenge only briefly because there was an inside latch to keep unwanted guests out until you had finished business.

And, so we are back to the deadbolt at the GLW coed bathroom. Most unisex bathrooms that I have encountered were the “one customer at a time” facilities, not public restrooms with privacy stalls intended for multiple, simultaneous use. Thinking about it too much will leave you thumbing through the personnel policy, trying to craft a hostile work environment complaint.

I thought we could use a little humor as we contemplate our next essential decisions as a Tribe, so I hope no one takes offense to this little fun aside. All joking aside, this is not intended to be a criticism of anyone and I know we are all doing the best we can with what we have. I will be glad when we get back to our designated gender bathrooms, not because of any prejudice. I would just like a simple thing like going to the restroom to be as stress-free and uncontroversial as possible. Regarding going to the restroom, we seem to be set in our ways. We may say we are super progressive, but a deadbolt speaks louder than words.