COMMENTARY: Take an hour to remember on Memorial Day

Before you fire up your grills or head out to purchase a new mattress, please take an hour or so to attend a Memorial Day event on Monday, May 27.  Originally known as Decoration Day, the day is set aside to recognize and remember the brave men and women veterans who gave the ultimate sacrifice.

A special ceremony will be held locally at the Cherokee Veterans Park at 11 a.m.  Lasting usually an hour, the event will feature patriotic musical presentations; a keynote speech by Principal Chief Richard G. Sneed, a U.S. Marine Corps veteran; a ringing of the bell ceremony honoring those members of the Eastern Band of Cherokee Indians who have been killed in action; a wreath-laying ceremony, and more. 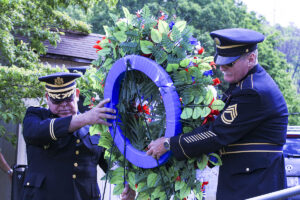 The event is hosted each year by the ever-present and ever-vigilant Steve Youngdeer American Legion Post 143 – one of the most active community organizations on the Qualla Boundary.

At last year’s event, Lew Harding, Post 143 Commander, stated, “None of you here today need to be reminded of the reason for this day, but what about the general public?…we believe that this special day of remembrance should be a civic obligation and regarded as such as veterans and non-veterans alike.  By honoring our warriors lost in battle, we preserve their memory and thus, their service and sacrifice we honor.”

I agree with Commander Harding.  It should be a civic obligation just as honoring veterans on Veteran’s Day should be.

Franklin D. Roosevelt, the 32nd president of the United States, once said, “Those who have long enjoyed such privileges as we enjoy forget in time that men have died to win them.”

We do enjoy incredible privileges each day as Americans.  Whether we live on an Indian reservation, next to a beach in California, in a high rise in New York City, or anywhere in between in this great land, we enjoy privileges that we take for granted each and every day.  We cannot, and must not, forget how those privileges are and have been maintained.

James Abram Garfield, the 20th president of the United States, once said, “For love of country they accepted death, and thus resolved all doubts, and made immortal their patriotism and their virtue.”

So, bring your family and friends and spend an hour, a small amount of time, to pay respects to those brave Americans who gave it all so we can have so much.