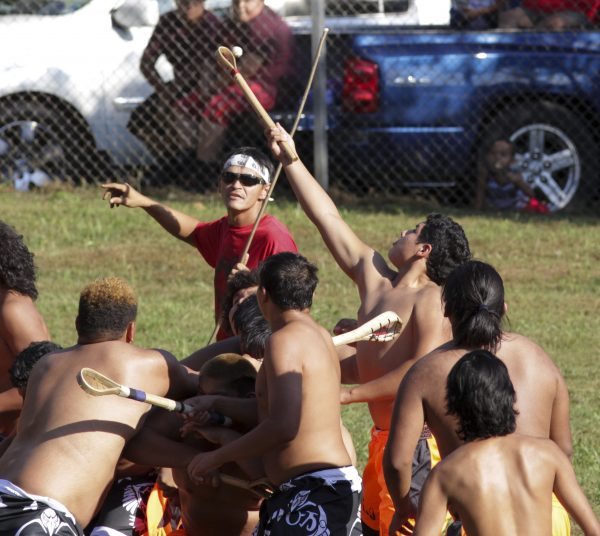 Known throughout history as the “little brother of war”, stickball, or Cherokee Indian ball as many call it, is one of the most exciting and brutal sports North America has ever seen.  Coming this summer, this year’s Right Path Adult Leadership Program class is hosting the Anetsodi Challenge which will be a stickball tournament celebrating the Cherokee style of the game.

The tournament, for those age 16 and up, will be held at the Cherokee Indian Fairgrounds on July 3-6.  The first day, July 3, will involve registration and a youth clinic, and the tournament itself will be held on the remaining three days.  The tournament places back to third with the first place team receiving $2,000.

“It’s a way for Right Path to give back to the community,” said Laura Blythe, Right Path participant who said they were tasked with developing community-based programs.  “So, we thought, ‘what does everyone here love?’  We thought of stickball at the Fair.  It brings a bigger crowd almost than Friday Night football.”

She said the idea for a tournament soon developed.  “Everyone loves to play NAYO; they love to play NASA.  So, we thought this would be a good structured event to do tournament-style stickball.”

Organizers hope the tournament is successful and turns into an annual event with a legacy trophy going to the winner similar to the Battle of the Nations football game between the Cherokee Braves and Choctaw Central Warriors.

Teams will be comprised of a 15-man roster with 10 players on the field at all times.  “It is open to all teams that play Cherokee-style stickball,” said Blythe.  “The Choctaws have their world series every year, but they play a different style of stickball.  So, you have to know our style of stickball.”

Unlike the Cherokee Indian Fair where most teams are community-based, organizers are hoping players will form different teams than they normally play on.  “At the Fair, they have Birdtown, Big Cove, etc. who will play together,” said Mariah Mahan, Right Path participant.  “At this tournament, we want them to stay away from using those names.  So, some teams could be players from Big Cove, players from Birdtown, but combined.”

Since first announcing their idea for the tournament, the reviews from the community have been mixed.

“People aren’t necessarily open to change or people doing something productive,” said Blythe.  “But, we’ve met with all of the leads of each community stickball team and gotten input from them.  We got some negative feedback and some said ‘we’re ready, just tell us when and we’ll be there’.”

Due to the fact that it is a tournament, there will be several differences from traditional stickball games.  “We’ve structured traditional style play, however, there will be time limits,” Blythe noted.  “So, that’s something a little different that they’re not used to.  We’re going to play the game to 12 points like we do at the Fair, but if they’re not done in 45 minutes we’ll have to call it in order to get ready for the next game in the schedule.  Really, it’s just because of the tournament style and so we can stay on schedule.”

One other difference in the tournament play will be the use of substitutions.  “In Lacrosse or hockey, substitutions can come after a made goal or a foul, and so they can sub quickly without stopping play as much.  That’s really the only kind of tweaks we’ve decided to keep in there.”

Organizers are looking for food and craft vendors to set up during the tournament.  For more information on this aspect, contact Mahan at the Cherokee Welcome Center (800) 438-1601.

For more information on the tournament, email: gwyrightpath2019@gmail.com