Tribe ‘sowing the seed of hope’ at groundbreaking

Tribal leaders of the Eastern Band of Cherokee Indians and members of the Cherokee Indian Hospital Authority Governing Board break ground on the new Crisis Stabilization Unit on the afternoon of Wednesday, April 24. (SCOTT MCKIE B.P./One Feather photos)

Ground was broken on a facility that tribal officials hope will further help members of the Eastern Band of Cherokee Indians suffering from behavioral or substance use issues.  Tribal leaders and members of the Cherokee Indian Hospital Governing Board broke ground on the new Crisis Stabilization Unit on the sunny afternoon of Wednesday, April 24.

“This is an honor for me to be a part of this very momentous occasion, and I thank each and every one of you for taking the time to be with us as we celebrate the beginning of the construction for this very special facility” said Carmaleta Monteith, Cherokee Indian Hospital Authority Governing Board chairperson.  “This facility is specifically designed to address the behavioral health needs of our people.  It is often said that the true measure of any nation can be found in how it cares for its most vulnerable people.  The Eastern Band is a great nation; one that demonstrates its greatness not through its economic prosperity but rather through its commitment to its weak and voiceless.”

She added, “Persons suffering from behavioral health and addiction disorders are often blamed, begrudged, and alienated.  Their disorders frequently manifest behaviors that exhaust our compassion and rob us of our hopes and dreams.  Overwhelmed and exhausted, we blame them for their plight and out of self-preservation, we sever our connections and withhold our love and affection.  Today, we are breaking ground to sow the seed of hope for our Tribe, and we are called to tend the soil to grow a healthier community.” 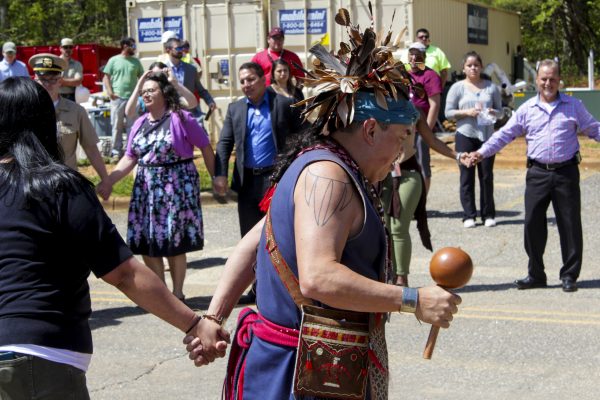 The facility, which is almost 86,000 square feet, comes in with a budget of $43 million and will be completed by October 2020.  Initially having 18 beds, with space to expand to 28, the facility will also be the new home of Analenisgi behavioral services.

The project has been designed by McMillan Pazdan Smith Architecture and will be constructed by Robins & Morton, the same firm that built the new Cherokee Indian Hospital.  “It’s really been an honor to be involved in this very special project,” said R. Cullen Pitts, McMillan Pazdan Smith Architecture principal architect.  “From the very beginning, the design and construction team was challenged with three goals and priorities.  One was to build a facility that is safe for everyone…not just for those attending or seeking treatment but for family members, guests, and the staff that is there every day.  The second main goal was to design a facility that honors the population served.  You can see in some of the renderings that we have, in the interior and the exterior, it will be seamless with the existing buildings.  The interior will be connected back to the hospital in a very purposeful way and will continue the theme that’s already established in the hospital with the storyline and the design details that already exist.  And, of course, the third is to deliver the project on schedule.”

Tribal Council Chairman Adam Wachacha said, “I think, with this Crisis Stablization Unit, this will be another piece to the puzzle for the continual care of our family members.  And, the word that I wanted to use today was perseverance.”

He said the road to recovery is a bumpy one.  “It has affected every member on this Boundary and in this country, and it’s unfortunate but it is also a blessing that we can take these and try to help our people in continual care to make sure we are doing all that we can from a tribal government perspective.”

A rendering of the Crisis Stabilization Unit per McMillan Pazdan Smith Architecture.

Big Cove Rep. Richard French, who is the chairman of the Tribal Health Board, said, “This is a great day for the Eastern Band…this has affected everyone – all of our families.”

He went on to say, “We can’t save everyone.  I know that, but if we can save that one person, we’re doing our jobs…they didn’t wake up one day and want to be in the situation they’re in.  We’re thankful that we’re in a situation where we can help these people.  They’re asking for help, and that’s our job, as leaders but also as community members, to help in whichever way we can help.”

Former Principal Chief Joyce Dugan, who serves on the CIHA Governing Board, commented that she has worked diligently on the substance abuse issue since losing a granddaughter over a decade ago.  “These young people did not set out to be addicts.  They did not say ‘I want to grow up and be an addict’.  And, their parents did not say ‘I want you to grow up and be an addict’.  I say ‘they’ and ‘our’ addicts because they, as a Tribe and a Cherokee family, they are ours.  Therefore, we have to deal with it.”

She went on to say, “These young people made a bad choice just like many of us did in our youth…we took risks then.  Think about it, those risks that we took could have killed us too.  But, today the risk is so much greater than what we faced – those of us who are adults.  The drugs that we’re dealing with now are so much more addictive.  There’s hardly a family on our Boundary that’s not been affected by addiction.”

Casey Cooper, Cherokee Indian Hospital chief executive officer, said, “In 2014, the North Carolina Institute of Medicine had a task force which specifically focused on the behavioral health and substance use crisis in North Carolina and what they determined in the 2014 report was that one in five North Carolinians actually suffered from a mental, behavioral, or emotional disorder and that one in 12, at that time, actually suffered from a substance use disorder.  We know, from our own data, the data that we report to the Board every month and to the Tribal Council every quarter, that more than 4,000 of our 12,000 active users actually have an active diagnosis of an emotional disorder or a substance use disorder.”

Cooper added, “So, there’s no question that there’s plenty of need here.  But, the question is ‘what are you going to do about it’?  Stop blaming and start doing something about it.”

Freida Saylor, Cherokee Indian Hospital director of behavioral health, thanked her staff as well as tribal leadership for their support.  “Once we sent community members out to other facilities for behavioral health and substance use issues, we lose the ability to ensure connection, quality service, and family involvement which, therefore, affects the outcomes of the people we serve.  Some of these are our brothers or sisters, our mothers, our fathers; so, it becomes very personal for us.  Passion is easy.”

She praised the vision to create the Crisis Stabilization Unit.  “I knew, as a Tribe, that we had a unique opportunity to address these issues.  Tribal leadership, past and present, have championed the approval and funding of a comprehensive behavioral health continuum.  This continuum included expansions of our behavioral health services; a residential treatment facility in the Snowbird Community; step-down homes for men, women, and children; and the facility and services of the Crisis Stabilization Unit.  If I could summarize my feelings in one word today, I would say that I am grateful.”

Principal Chief Richard G. Sneed gave closing remarks during Wednesday’s event.  “There was a lot of discussion about the Crisis Stabilization Unit.  It really came about from the fact that there was this piece missing.  When we began dealing with heroin and opioids, we had people in withdrawal.  Prior to going into withdrawals, they had no interest necessarily in getting help.  They were trapped.  Then, when they presented at the Emergency Room, we had no place for them to go.  We were really at the mercy of waiting for an opening somewhere else at another facility before our facility opened.”

He added, “It was, at that time, that we determined that what we needed was a secure facility for when these folks presented at the ER, we would have some place safe where they could detox, where they would have constant contact with health care workers and with behavioral and mental health professionals.  That was really the impetus for the Crisis Stabilization Unit.”

Bo Taylor, Museum of the Cherokee Indian executive director, led the people present at the event in a Blessing Ceremony for the new facility followed by leading everyone in the Cherokee Friendship Dance.

Funding for the design phase of the project was approved by Tribal Council in October 2016.  The resolution that authorized the funding was submitted by the late Beloved Woman Lt. Col. (Ret.) Kina Swayney who said at the time, “This is yet another step toward providing complete care for our people so we’re not relying on overcrowded systems.  Our sovereign state gives us the capability to create a program that meets our cultural and spiritual needs while keeping the patient here, close to family.  We are essentially ‘taking care of our own.'”

Tribal Council approved funding for the entire project in July 2018 with the passage of Res. No. 263 (2018) which states, “…the greatest current threat to the health and well-being of the Tribe has become the opioid and illicit drug epidemic, causing widespread trauma and grief, leading to criminal justice involvement, family disruption, overdose, and death…approximately 430 cases present to the emergency department annually in need of detox or inpatient psychiatric services which are often not available through the state system…”