The 2019 AISES Leadership Summit was recently hosted by the Eastern Band of Cherokee Indians (EBCI) and was held at Harrah’s Cherokee Casino & Resort for the first time in the organization’s 42-year history. 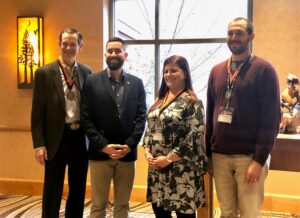 Several tribal entities sponsored the event. Alicia Jacobs, Jones-Bowman Leadership Award Program leadership specialist and AISES Board of Directors said, “The AISES Leadership Summit held in Cherokee, North Carolina was an extraordinary example of how a tribal community is committed to the future of their people and sustainability of their workforce. As the Vice Chair of the AISES Board of Directors, I have seen the value of increasing the representation of American Indians in STEM studies and careers right here on the Qualla Boundary. The Eastern Band of Cherokee Indians’ community through the exposure of a national organization such as AISES has a strong STEM presence within the professional body of the tribe along with our college students pursuing STEM fields, and down to our students at the Cherokee Central Schools level who are working on culturally based STEM curriculum.”

She added, “Building STEM capacity within tribal communities is a critical component to ensuring the infrastructure of tribal assets are managed by tribal members in order to avoid out-sourcing. It strengthens the workforce development, tribal sovereignty and has the potential to produce entrepreneurial advancement for enrolled members who hold STEM degrees.”

During the AISES Leadership Summit, 13 different sessions were conducted by EBCI professional divisions of the tribe making a powerful presence on behalf of the community. AISES has recently encouraged tribal communities to form chapters to strengthen and support their mission as tribal STEM professionals are vital for future sustainability.

The EBCI AISES Tribal Chapter is one of the first of two tribal chapters approved by the Board of Directors during the recent Leadership Summit.

EBCI AISES Tribal Chapter President Joey Owle, EBCI Secretary of Agriculture and Natural Resources, said, “It is a tremendous honor to serve as the AISES EBCI Chapter President.  This accomplishment is owed to the hard work of several of our chapter members who quickly moved on the opportunity to submit our application for chapter recognition ahead of the AISES Leadership Summit.  Our chapter looks forward to collaborating with local resources in Cherokee to further the advancement of Native Americans in STEM fields.”

During the opening ceremony of the 2019 AISES Leadership Summit, 14 members of the Cherokee Youth Council (CYC) performed two Cherokee traditional social dances. The CYC is a culturally-based leadership program for Eastern Band Cherokee youth in grades 7-12. This program is housed under the Ray Kinsland Leadership Institute at the Cherokee Boys Club and is funded by the Cherokee Preservation Foundation. The CYC chose to demonstrate the Buffalo Dance and the Friendship Dance providing the conference attendees with the opportunity to participate in their social dances as a way of welcoming the guest to the Qualla Boundary. 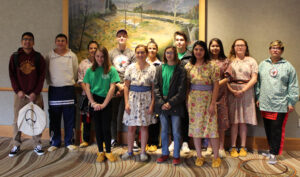 As the opening ceremony keynote speaker, Principal Chief Richard G. Sneed encouraged and challenged attendees to thrive, “As a former educator, I recognized the positive impact the education plays in advancing an individual’s life but also the lives of tribal members and their nation. Our school system has placed an emphasis in the STEM & STEAM curriculum. We recognize the future success of our tribal members and our tribe is predicated upon the ability of young people to be competitive not only in a local economy or national economy but more importantly in a global economy. Technology is changing the face of business, the education and certainly, the social fabric of tribal community. It is imperative that our tribal members are equipped to lead the way in the 21st century workforce if we are to thrive as tribal nations in the future.”

Jacobs commented, “I am thankful for the support of our EBCI community, Executive Office and Tribal Council, and the Cherokee Preservation Foundation for setting such a strong example for other tribal communities to follow when it comes to supporting STEM by financially investing in the AISES Leadership Summit. The EBCI community really came through on this event providing support, professional tribal members conducting leadership sessions and being incredible hosts to our guests. I still am receiving compliments from guests that attended, students, professionals, Council of Elders, staff and tribal officials. Congratulations to the Eastern Band of Cherokee Indian community for raising the bar.”