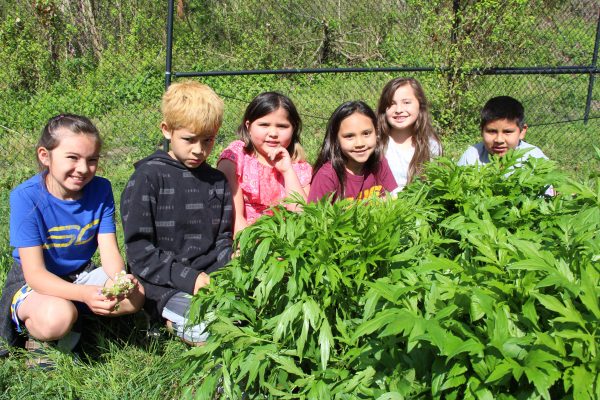 Students at the New Kituwah Academy are enjoying participating in 4-H programs and are learning about a bevy of subjects as well.  From third graders learning how to plant a garden to sixth graders increasing their knowledge of recycling, New Kituwah students are expanding their horizons.

“Based on the North Carolina state standards, 4-H has different curriculum for each grade level,” said Jessica Metz-Bugg, New Kituwah Academy science teacher.  “These are all project-based learning projects so not only is it service, but they’re learning something as they do the service.”

She noted that the third grade students have done more than any of the other grades in 4-H this year.  “They will be getting their first pins and certificates for completing the literature in the garden curriculum.  It’s been so fun.”

Metz-Bugg said that by the time the third grade students finish sixth grade they should each be 4-H Certified Junior Master Gardeners.  In this year’s garden, the students planted squash, sunflowers, mustard greens, creasy greens, sochan, strawberries, and mint.  “Thanks to Harold and Nancy Long for helping with the garden kits and making this possible.”

Fourth graders learned about embryology and wildlife gardening (birds and pollinators).  The fifth graders are organizing a litter pick-up on the Cherokee Day of Caring, and the sixth graders started a recycling program.

“First, we read books about planting in the classroom,” said Wadulisi Pheasant, third grader who explained that they planted sunflowers, squash, and other plants.  “Mine was the smallest and it became the biggest.” 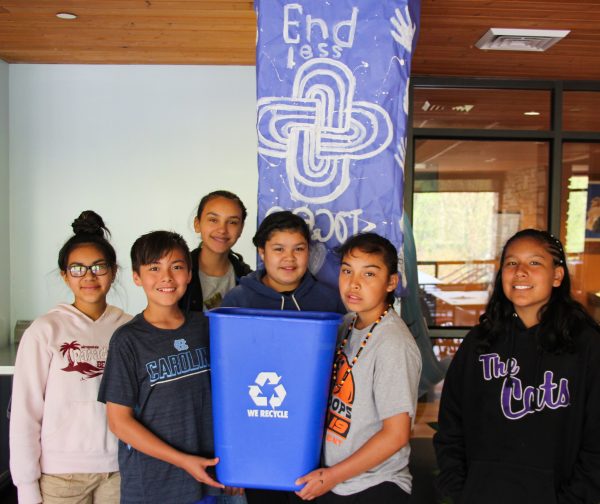 Sixth grade students at New Kituwah Academy are shown in front of a recycling sign they made as part of a campaign to decrease trash and increase recycling efforts at their school. They are shown, left to right, Iya Grant, Tyce Hogner, Watiyeli Taylor, Cameron Jackson, Tsuli Lossiah, and Agasga Cooper. Not pictured – Trevor Ledford, Cohen Pheasant, Kallup McCoy III.

Agasga Cooper, sixth grader, explained their project, “We found that most of the recycling bins that we have were being used for normal trashcans and not for recycling.  So, we made a plan to make signs and instructions on how to recycle.  There’s not enough space for all of the trash in this world.  So, recycling is a better way to re-use everything.”

Tyce Hogner, sixth grader, said of their project, “Recycling is important because it keeps the Earth clean and we can re-use a lot of things.  Instead of just throwing things away that will go into landfills where they bury it and it takes a long time to dissolve, we can just recycle it and re-use it.”

Metz-Bugg thanked the staff at the EBCI Extension Office for their help.  “None of this would be possible without them.  We’ve dedicated a day a week to 4-H, and it’s something the students look forward to each week.”

Sally Dixon, EBCI Cooperative Extension agent and 4-H youth development, is also thankful for their partnership with the New Kituwah Academy.  “They’ve been a fabulous, really big, first step in rebuilding our 4-H program.  They’ve really taken it to heart on the hands-on, experiential learning that we emphasize in 4-H, and they’ve run with it and integrate it into the classroom.  They’ve provided a lot of valuable opportunities for us to adapt 4-H curriculum to integrate Cherokee language and culture.”

She concluded, “It’s been a great partnership, and they’ve done so many fabulous things.  The kids have enjoyed being able to be involved in 4-H and being able to have that in their classroom.”