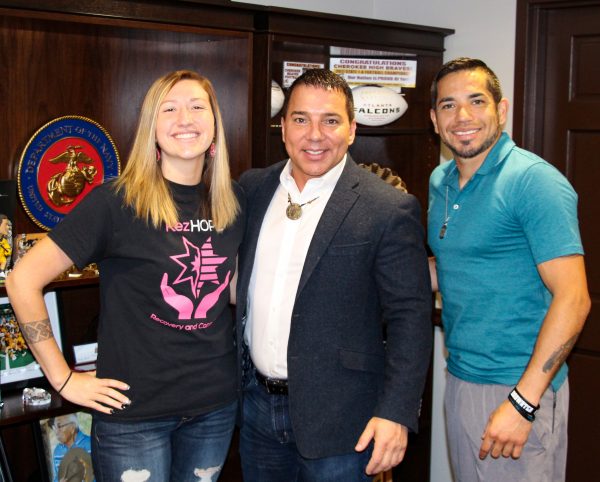 Principal Chief Richard Sneed, center, is shown with Rez HOPE leaders Katelynn Ledford, left, and Kallup McCoy II in the Office of the Principal Chief on the morning of Wednesday, April 17. Rez HOPE is partnering with Chief Sneed’s office on the Bowling for Hope Fundraiser, benefiting the Rez HOPE program and the Cherokee Children’s Home, to be held at the UltraStar Multi-Tainment Center at Harrah’s Cherokee Casino Resort on Tuesday, May 7. (SCOTT MCKIE B.P./One Feather photo)

Bowling for Hope is being organized as a fundraiser for Rez HOPE and the Cherokee Children’s Home.  The event is being hosted by Rez HOPE, a substance abuse recovery advocacy organization, and the Office of the Principal Chief, and will be held at the UltraStar Multi-Tainment Center at Harrah’s Cherokee Casino Resort on Tuesday, May 7 from 6:30 p.m. to 8:30 p.m.  The cost will be $5 per game (shoe rental included) with the proceeds being split between the two organizations.

“The hub of what is really going to help people in recovery is true community,” said Principal Chief Richard G. Sneed who praised the efforts of Rez HOPE.  “You can’t hire a community.  We’ve got great people in our programs and all of these components that we have, but they’re all sort of ancillary because we’re dealing with human beings and the human component is the hub.  Rez HOPE is really the human components – it’s true community.”

Chief Sneed said that recovery is a 24-hours a day, seven day a week endeavor.  “To me, Rez HOPE has really been the missing component in our community when it comes to recovery.  What Rez HOPE does is put a human face on recovery as opposed to the approach that has been there for 50 years is just punitive – punish, punish, punish.  We’re trying to change the mindset and the culture around recovery to these are our family members – moms, dads, husbands, wives, sons, and daughters.  There’s no one in this community who hasn’t been affected.”

He praised the efforts of Rez HOPE founder Kallup McCoy II and Ledford, “It takes someone to be a champion.  They have really become the champions of recovery in our community.”

Ledford commented, “I would really like to see a lot of our community come out.  It’s not just bowling; it’s so much more meaningful.  We’re trying to get people into recovery.  It touches so many people’s families.  There’s not a family here that hasn’t been affected by it.”

She added, “Our organization is trying to encourage people to come to recovery and that’s what these proceeds are going to help us do.  The Tribe is building the Women’s and Children’s Recovery Home, and we’re wanting to open up the Men’s Home and we’re raising funds for that now.”