ON THE SIDELINES: Coach Briggs is retiring and will be missed 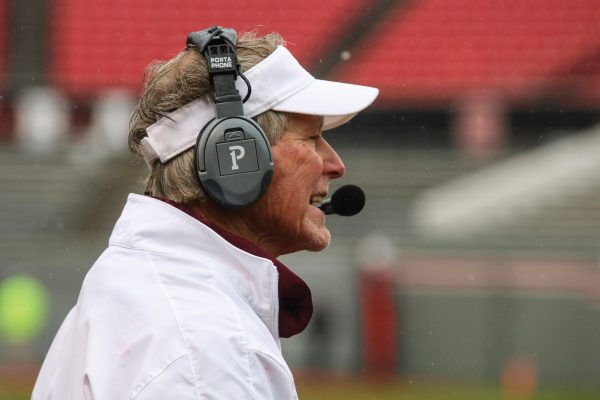 Kent Briggs, Braves head football coach, is stepping down and retiring from the sport he loves.  His class and dedication to the student-athletes will be missed, but his legacy will be felt for a long time to come.

In a letter (read the entire letter at the end of this column), Coach Briggs wrote, “After deep reflection about family, football, and life, I have decided to retire.  There are many factors I considered before making this decision: personal, professional, medical, and what is in the best interest of Cherokee.  I am doing ok after my second battle with stage four cancers, but I want to experience life from a different perspective other than on the sidelines.  It is a difficult decision for me to make, but I believe in my heart that the timing is right for a new head coach to take over Cherokee football and continue to develop the young talent that we have here.  I am confident that many other championships are on the horizon.” 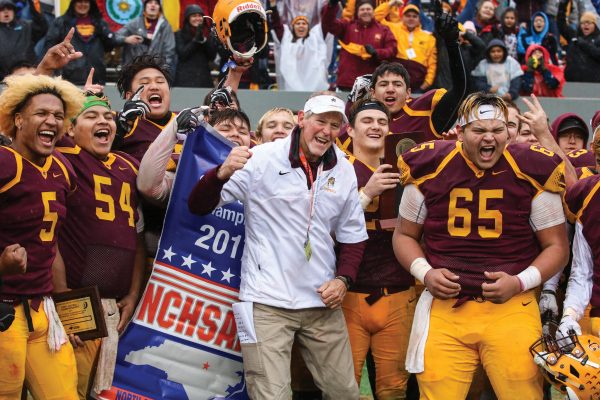 Coach Briggs, front and center, celebrates the victory in the State Championship game with his players.

I have had the pleasure of covering his career at Cherokee High School which started in 2014.  My first interview, one of many more to come, was on a hot, humid afternoon following a scrimmage at home against Gatlinburg-Pittman (Tenn.).  He praised his player’s effort and noted, “We have a long ways to go as a football team, but I really and truly believe we have the ability to do that.  We just have to get better each week and, at some point, if we stay the course, I think we can be something that we all can be proud of.”

Well, he steered the ship and the Braves did stay the course.  It was a long journey, but on a cold, snowy Saturday in December three years later, they hoisted the 1A State Championship trophy.

Several months after that historic victory, Coach Briggs was named an Honorary Member of the Eastern Band of Cherokee Indians.  During its regular session on March 1, 2018, Tribal Council passed unanimously Res. No. 143 (2018), which was submitted by his players – no surprise there, the respect they have for him is immense.

That legislation reads, “Mr. Kent Briggs has given selflessly and built a strong foundation for our students and athletes through his empathy, encouragement, determination, commitment, and enthusiasm as he inspires our students to reach down into their souls to bring forth their very best.  Despite his recent health and battle with cancer, he continued to be present for our students and athletes as a coach, leader, and mentor.  His inspiration and motivation have created more than a team.  He has created a family.”

Following being bestowed the honor, Coach Briggs noted, “I’m completely without words.  This is the greatest honor I’ve ever had or will ever have…I don’t know what to say except for I’m very, very proud and very honored, and I will do all I can do to uphold the representation of being part of this Tribe.”

That day, Tribal Council Chairman Adam Wachacha summed it up best by saying, “On behalf of the Tribal Council, we too would like to thank you for your hard work and dedication and everything that you put into what a coach should be.  To come into this community and be the person that you are and show your humbleness, we appreciate you.”

Humility – Chairman Wachacha touched on it, and he is very right.  It is the humility of Coach Briggs that makes him such an outstanding coach and human being.  He also excels at being a source of positive light on the sidelines.  During interviews, he doesn’t sugar coat things that are wrong, but he makes sure to highlight what they are doing right and that is what led to the Braves’ state championship run in 2017.  Fix the things that are wrong and highlight the things you are doing correctly and you’ll be successful.

Following the 2018 season, Coach Briggs was selected to be an assistant coach for the prestigious Shrine Bowl of the Carolinas.  When interviewing him, he spoke only about Isaiah Evans, who was selected for the 2018 game, and Tye Mintz, who had been selected the year prior.  Coach Briggs is not a boastful man, and he doesn’t have to be – his players speak for his coaching.

I will close this column with a quote from the man himself, Coach Briggs, who said the day he was made an Honorary Member of the Tribe, “The biggest thing that I think got us to a state championship was believing in ourselves, these guys believing that they could do it, and they did that because Cherokee believed in them.”

Those are words to live by for sure – work together and believe in yourself and your group and the outcome will be great.  Have a wonderful retirement Coach!  I’m going to miss you on the sidelines.

To the great people of Cherokee,

After deep reflection about family, football, and life, I have decided to retire.  There are many factors I considered before making this decision: personal, professional, medical, and what is in the best interest of Cherokee.  I am doing ok after my second battle with stage four cancers, but I want to experience life from a different perspective other than on the sidelines.  It is a difficult decision for me to make, but I believe in my heart that the timing is right for a new head coach to take over Cherokee football and continue to develop the young talent that we have here.  I am confident that many other championships are on the horizon.

Five years ago, I was given a tremendous opportunity to become a part of Cherokee High School and its community where I have been all in.  The Cherokee Central School Board and School Administration have given me great support and resources to do my job.  They stood strongly beside me during the development process of the program and even stronger during my battles with cancer.  They gave me the opportunity to continue in my coaching efforts through that time, and I will always be grateful for that.  I could not have had, nor will ever have, a better job than being the head football coach at Cherokee High School.

I want to thank the Cherokee people and community for all the love that they have given me.  I consider becoming an Honorary Member of the Eastern Band of Cherokee Indians my highest honor that I will ever be bestowed.

Most of all, I have been so blessed to have worked with so many good young men and coaches here at Cherokee.  Having the opportunity to be a part of their lives has been incredible.  It has been so meaningful to me to watch these guys grow up and be a part of sharing in the experiences that we have had.  Winning the state championship was, of course, amazing, but the journey we had getting there is what I think about every day.  This will last in my mind forever.

I will truly miss being your football coach and Cherokee will always have a very special place in my heart.