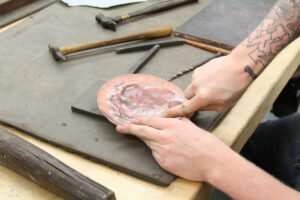 The art of hammered copper is being taught at Cherokee High School thanks to a grant from the North Carolina Arts Council to support a three-week artist residency at the high school by metalsmith William Rogers. (Photo by Yona Wade/Cherokee Central Schools)

Cherokee Central Schools has been awarded a grant from the North Carolina Arts Council to support a three-week artist residency at the high school. Students in Josh Adams’s Wood Carving class and Lori Reed’s Arts and Crafts class are learning about a technique used by native peoples to make ceremonial metal plates and gorgets.

The workshop is being taught by metalsmith William Rogers, who completed a similar workshop at the high school in 2011. The artist worked collaboratively with high school students to create the steel and copper mobile that hangs in the atrium of the Chief Joyce Dugan Cultural Arts Center. He returns to teach the ancient technique of hammered copper in a hands-on workshop for students and their teachers.

Copper is a naturally occurring mineral that, once dug out of the earth, is soft enough to be hammered into a shape. People who lived in the Southern Appalachians made copper artifacts around 1,000 BC. The technique of hammering designs into plates is today called repousse´. In 2016, archeologists found copper and iron in the Cowee Mound near Franklin.

In Cherokee, artisan Arch Miller made copper items and sold them through Qualla Arts and Crafts Mutual. He was a charter member of the co-op when it formed in 1946. Although it was practiced all over North and South America – and was used to create the skin on the Statue of Liberty – repousse´ remains a little known craft.

While this tradition was practiced more than 1,000 years ago, with the exception of Arch Miller, the Eastern Band was no longer making hammered copper. Since the early 2000s, Rogers has worked with the co-op, local community clubs, and the Oconaluftee Indian Village to revitalize the craft.

The North Carolina Arts Council also supports two teaching assistants to work in the classroom. James “JR” Wolfe, of the Big Cove Community, and Nathan Bush, of the Snowbird Community, are historic interpreters at the Oconaluftee Indian Village. Since 2015, they have demonstrated metal arts, a new addition to Village offerings. Both are now exhibiting members of the co-op and show their copper work at the Cherokee Indian Fair. In 2018, the trio worked together on a copper and steel sculpture representing an Eternal Flame for the Stecoah Valley Cultural Arts Center.

The Arts in Education grant places professional artists in a North Carolina schools “to provide students with arts learning experiences that spark creativity, imagination, and innovation.”