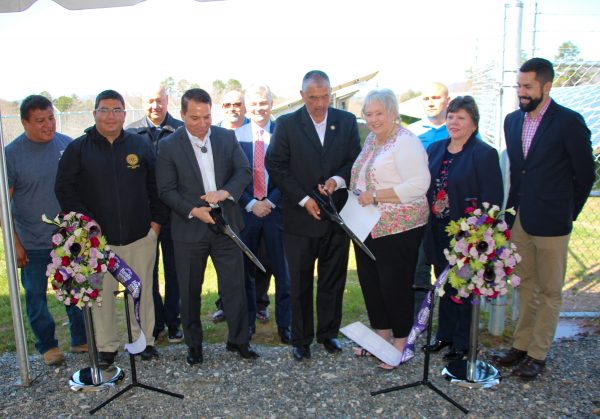 MURPHY – On a sunny morning perfect for the event, leaders and officials of the Eastern Band of Cherokee Indians (EBCI) cut the ribbon opening a new solar power array.  The 2,016 solar module photovoltaic (PV) array opened on the morning of Wednesday, March 27 at Harrah’s Cherokee Valley River Casino & Hotel and is expected to cut energy demands and costs at the facility.

“This is a big event for us and the Tribe, and we’re excited to be a partner with the Eastern Band on this exercise,” said Lumpy Lambert, Harrah’s Cherokee Valley River general manager, who thanked tribal leadership for their help in the project as he opened the event.  “We appreciate all of the support from the Eastern Band.”

The project, designed and constructed by Siemens Government Technologies, Inc., was funded with a $1 million Department of Energy (DOE) Grant with the Tribe picking up the remaining $1.36 million.  According to information from the DOE, “This community scale PV farm would supply power to four buildings totaling 155,352 square feet: casino (110,400 square feet), hotel (23,000 square feet), and two administration buildings (10,976 square feet each).  All power generated would be consumed onsite.”

Joey Owle, EBCI Secretary of Agriculture and Natural Resources, previously told the One Feather that the project will save the facility around $100,000 annually in energy costs.

“Cameron Cooper was really the first person who brought the idea forward,” said Principal Chief Richard G. Sneed.  “He was actually fulfilling a role that wasn’t even his job…within his department, there was a position for alternative energy and he just kind of took that on as a side project in addition to his other duties.  We had some meetings with the guys from Siemens, and then when Joey (Owle) came on board, he really took the reins on this, took the lead and has done a great job.”

Chief Sneed added, “I know that there are a lot of people who have had input on this project.  We’ve had a great partnership with the folks from Siemens.  We really appreciate you and all that you’ve done.”

Vice Chief Alan “B.” Ensley commented, “These projects start in planning board.  I want to thank Joey for helping make the project happen…I want to thank everybody involved.  This will be a great project.” 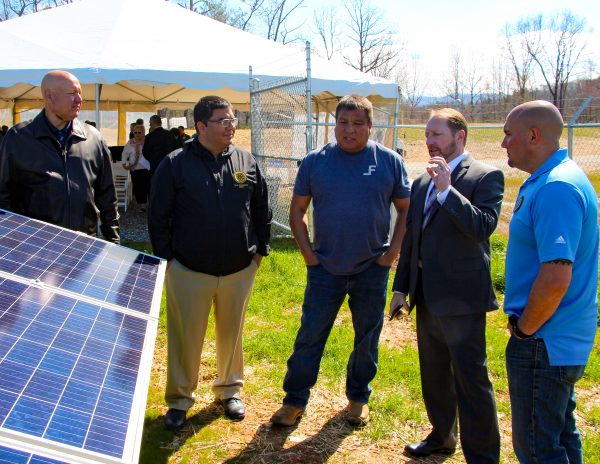 Tribal Council Chairman Adam Wachacha stated, “I’m glad that another project has come to fruition with the solar project coming together.”

He also recognized the work of Cooper and Secretary Owle as well as his fellow Tribal Council representatives about whom he noted, “It’s always good to work alongside them and the vision they’ve had to push through.”

He also praised Cooper’s efforts stating that it started with Cooper putting out a two-page RFQ (Request for Qualifications) dealing with the grant.  “We put it out, three companies bid.  Two came back with hefty prices and Siemens came back with a very suitable price of zero dollars because that’s the way their company works on other grants.”

Secretary Owle finished with, “I never thought I would be able to stand here, in this role, to have the extraordinary opportunity to work with the people I’ve been able to work with, to be able to say the Tribe has it’s first community scale 705 kilowatt solar array that is going to be impacting our community, and Harrah’s, to save energy, and to reduce our carbon impact on the environment.  For the system, we have a 25-year warranty on it so we’re looking an ROI (return on investment) of around 13 to 15 years.  This is going to be here for years to come.”

Gregory Bowman, Siemens Government Technologies deputy and chief operating officer of E&I programs, said, “People look at solar arrays and they look at various energy projects, and they see it as a piece of steel, a piece of lighting, but, in actuality, it is a piece of the future.  The vision that the Cherokees, the vision that Harrah’s, the vision that our team, led by Craig Plomondon, had is just amazing.  We really appreciate the partnership, the leadership, and the passion that you all have with these types of projects.” 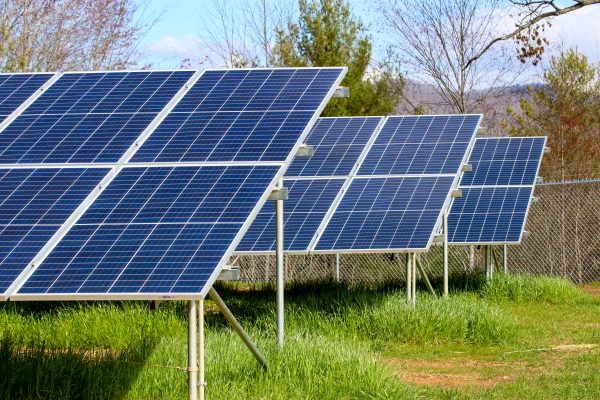