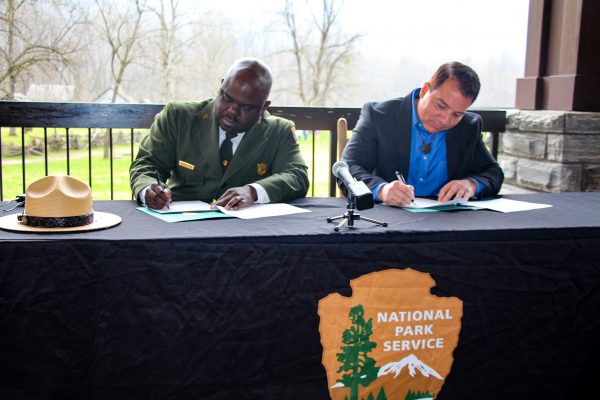 Cassius Cash, left, Great Smoky Mountains National Park superintendent, and Principal Chief Richard G. Sneed, sign a general agreement, at the Oconaluftee Visitor Center on the morning of Monday, March 25, that will allow for the legal harvesting of sochan in the Park by members of the Eastern Band of Cherokee Indians who have obtained permits. (SCOTT MCKIE B.P./One Feather)

Since time immemorial, Cherokee people have harvested traditional plants such as sochan and ramps, from the beautiful mountains in western North Carolina.  Over time, laws have prevented tribal members from harvesting these healthy plants.

A process many years in the making came to fruition on Monday, March 25 as the Eastern Band of Cherokee Indians (EBCI) and the National Park Service signed an agreement regarding the gathering of sochan (Rudbeckia laciniata) by tribal members.  Principal Chief Richard G. Sneed and Cassisus Cash, Great Smoky Mountains National Park superintendent, signed the agreement, at the Oconaluftee Visitor Center, that authorizes 36 permits to be issued to EBCI tribal members for the traditional gathering of the plant.

“This is an historic day because today the National Park Service and the Eastern Band of Cherokee Indians, under the leadership of Principal Chief Sneed, will be signing an agreement that will allow select members of the Tribe to harvest a plant that we call sochan which is a very important dietary, cultural ritual to the Cherokee Indians,” Superintendent Cash said as he opened remarks at Monday’s event.  “This was a long process.  This was a thoughtful process.  It was science-based as well.  With those three factors, we feel that today’s agreement will strike a good balance in allowing us to honor the traditions of the Cherokee Indians while also preserving this precious resource for generations to follow.”

As part of the process to formalize the agreement, an Environmental Assessment (EA) was performed and came back with a FONSI (Finding of No Significant Impact) ruling.  To speed the process of having the EA performed, Tribal Council allocated funds during an Annual Council meeting in October 2017 for the cost associated with the Assessment. 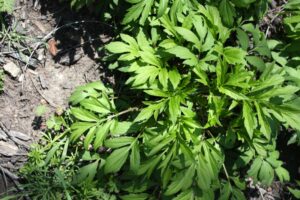 Sochan, also known as green-headed coneflower or cutleaf coneflower, is an herbaceous perennial in the sunflower family. (Photo courtesy of Dr. David Cozzo/RTCAR)

“This day marks the return of the Principal People, the Anikituwah, the Eastern Band of Cherokee Indian people, to have access to be able to harvest sochan,” Chief Sneed said during Monday’s event.  “It’s historic, and there are many people I’d like to thank. First and foremost, our Secretary of Agriculture, Mr. Joey Owle, and everybody on his staff – Tommy Cabe, Mike Lavoie, and their staff – for all of the hard work that they did.  I would also like to recognize our Tribal Council members who attended many meetings in Washington, DC with us when we negotiated with the Department of the Interior and the National Park Service.  I would like to thank Superintendent Cash for his leadership on this.  This is really monumental.”

Chief Sneed added, “I want to thank everyone at the Park Service for their cooperation and the relationship that we have.  I think it demonstrates the fact that we are both good neighbors to one another, and it demonstrates the government-to-government relationship that has been the hallmark of Indian Country and our relationship with the federal government.  It works when we follow a process.  Sometimes, that process takes a little bit longer, but, at the end of it, it’s a day where we see completion.”

The National Park Service put into practice new regulations in August 2016 whereby members of federally-recognized American Indian tribes can legally perform traditional gathering of plants in national parks that encompass their traditional territory.  As part of those new rules, tribes must enter into agreements with their local park such as the EBCI did with the Great Smoky Mountains National Park.

EBCI Secretary of Agriculture and Natural Resources Joey Owle said Cherokee community clubs have been very instrumental in developing the permitting process that will be used.  “We intentionally did that because we really want the community clubs to have ownership of this whole project and for them to work with their community members.”

He noted that a total of 36 permits will be issued with up to six family members being allowed to harvest on each permit.  “We will go through the training that’s been outlined by the Park, get them permitted this week, and get them harvesting.”

Secretary Owle said the limit per permit is two bushels of sochan per week with no more than 1.5 bushels harvested per event.  He said the window for harvesting will be March 1 through May 31 and permits will be good for one year with them being issued annually.  “This is really a pilot program here for us.  The Park’s never done it; we’ve never done it.”

He said transparency and training are important to the process.  “We had specially-made bags made for this so that everybody will have the same kind of bag, very identifiable.  Communication with our Park staff is very key.”

Compliance is also key.  Secretary Owle noted that two offenses in breaking the rules set forth will result in a permit being pulled for five years.  “We want folks to take this very seriously.”

Now, that the sochan agreement is signed, tribal officials are looking down the road at the harvesting of ramps.  “We definitely want to see some good data and some good information come out of this to access the permitting program over the next two years,” said Secretary Owle.  “But, we are going to go ahead and get that discussion going.”

A general agreement is required between the NPS and the Tribe for each plant that would be gathered.  “This is something that I think we could realistically look for in about two years,” Secretary Owle noted.