The HIP Housing Development in the Snowbird Community will be named in memory and honor of former Cherokee County – Snowbird Rep. Diamond Brown Jr. who passed away in February 2016.  Tribal Council approved unanimously Res. No. 525, during its regular session on Thursday, March 14, that approved the naming.

The legislation was submitted by Tribal Council Chairman Adam Wachacha, Cherokee County – Snowbird Rep. Bucky Brown, and Vice Chief B. Ensley.  To honor the memory of Diamond, each Tribal Council representative stood to cast their vote in favor of the resolution. 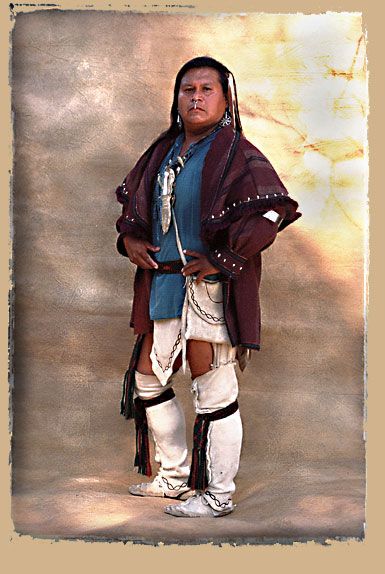 The HIP Housing Development in the Snowbird Community will be named in memory and honor of former Cherokee County – Snowbird Rep. Diamond Brown Jr. who passed away in February 2016. (Photo contributed)

During discussion on the resolution on Thursday, Rep. Bucky Brown said, “This project down there took a little while to get going.  There’s a couple of home down there now, and we’re looking forward to some more houses.  Diamond had a great passion for our community, and he wanted to see this property developed.”

Diamond’s mother, Frieda Brown, said, “During Diamond’s campaigns and all of the things he did in Snowbird, I was one of his main supporters.  I loved him because he’s my son.  I raised him to do what was right.  I feel that this housing development, because it was one of his assignments, that it should be named after him.”

Brooke Brown, Diamond’s daughter, spoke passionately and said, “Our family struggles…and, our struggle is carrying on who he was, who he is, and his legacy and continuing on to live life as we do each day.  One of the many things that we did as a family is we shared him.  We shared him with those all over this world.”

She said he always helped those in need.  “He may have stood with you, beside you, making decisions for his people – all of his people.  Our family honors his dignity, his grace, his power, his pride, and his strength that will last generations…”

Everyone who spoke during discussion on the resolution on Thursday referenced Diamond’s great sense of humor.  Vice Chief B. Ensley referenced the fact that Diamond and Big Cove Rep. Perry Shell would frequently tease and joke with each other.  “We all have a lot of good memories of Diamond…he really loved the Snowbird Community and he was overall a good man.” 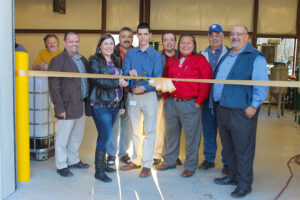 The late Diamond Brown Jr., third from right, was very active in many projects during his two terms as a Tribal Council representative for the Cherokee County – Snowbird communities. Here, he is shown with other tribal leaders at a ribbon cutting for the new biodiesel facility in Cherokee on Dec. 19, 2012. (SCOTT MCKIE B.P./One Feather)

Chairman Wachacha spoke also of Diamond’s dedication, “The two terms that I served with Diamond was an enjoyable experience…Diamond was a true friend and he was very passionate about the community.  He worked very hard when it came to the community clubs and getting things done.”

Painttown Rep. Tommye Saunooke noted, “We could tell you stories all day about Diamond.  He was a wonderful person.  He was hilarious, but he was such a true gentleman – never said anything wrong.”

Rep. Shell said, “We joked, but that’s how you offset the seriousness and the weight of being in this position of passing the laws and how it affects all of the people.  He knew that and he understood that.  He loved his people, and he fought for Snowbird.  He fought for all Cherokee people.  He wasn’t bashful.  He was smart, and he took very seriously his role.  I miss him.”

Following the vote, Principal Chief Richard G. Sneed presented a flag of the Eastern Band of Cherokee Indians to Diamond’s family in honor of his service to the Tribe.  A copy of the resolution, which will be translated into the Cherokee language, will hang at the entrance to the Diamond Brown Jr. HIP Housing Development. 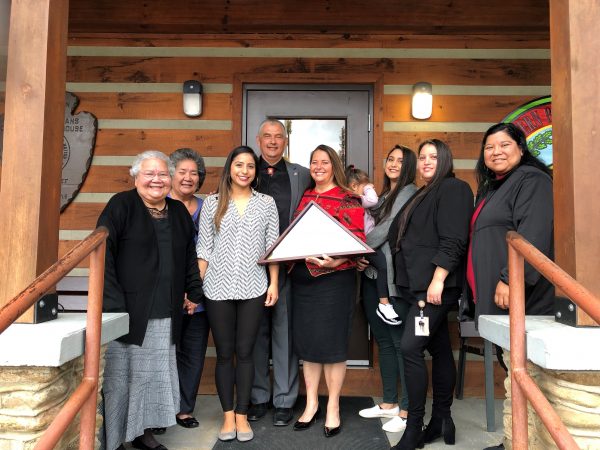