Road to Soco under maintenance 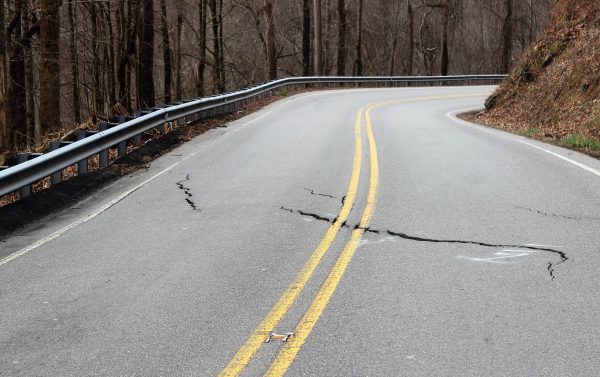 Heavy rains over the last few months have few months have resulted in larger than average maintenance needs on Hwy 19 (Soco Road), particularly on the Cherokee side of Soco Mountain. (ROBERT JUMPER/One Feather)

Heavy rains over the last few months have few months have resulted in larger than average maintenance needs on Hwy 19 (Soco Road), particularly on the Cherokee side of Soco Mountain. A recent message on tribal email from Principal Chief Richard G. Sneed’s office stated, “North Carolina DOT will be performing intense road maintenance from the top of Soco Mountain to Holiday Campground.  Lane closures and detours may occur. Drive Safely, watch for signs, flag men, construction crew and construction equipment.”

Wesley Grindstaff, NCDOT Division maintenance engineer, had the following response when asked about the message from the Chief’s office. “There are some cracks in the roadway that we have been monitoring since those February rains. They are going to be sealing those cracks with an asphalt material, we call it crack sealant, and in addition and probably more extensively, they are doing general maintenance. I think that there has been just a general need all winter. We have had a lot of trees fall, a lot of rocks roll into ditches. They’re clearing ditches, opening up drainageways, opening up drainage pipes, clipping shoulders, removal of trees and other hazards that have fallen into the right of way. I think that they have about three full maintenance crews performing those type activities.”

Grindstaff stated that there doesn’t seem to be an indication of impending catastrophic failure on the road. He said, “Throughout our division and in Jackson County, and in other locations as well, since we have had these heavy rains this year, we have had a number of places do that (roadways that have cracked and shown some depression). These particular locations, we have had our geotechnical units out to review these sites and they do not have those concerns that there is going to be a catastrophic failure or anything like that. We do need to do some things like seal those cracks. We are monitoring those locations pretty much daily and are making some drainage improvements to help slow down that settlement and try to stop that settlement. Once we finally dry out a little bit and everything has stopped moving, we have had a number of these locations where we need to do some resurfacing and leveling up some of those locations, those depressions that you feel on that particular road. We’ve got two locations (Hwy 19 on the Cherokee side of Soco) that we are monitoring and looking at and after things dry out will try to make some corrections to it.”

Polly Jo Kelley, with CDOT, thinks that general patching and maintenance should be done by March 15, with more extensive roadwork to come later in the Spring when the asphalt plants reopen.