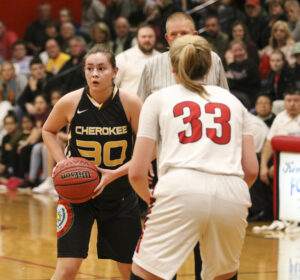 Tori Teesateskie, Lady Braves senior shown squaring off against East Surry’s Elle Sutphin during the sectional finals on Saturday, March 2, has been selected to play in the Blue-White Game on March 23. (SCOTT MCKIE B.P./One Feather photos)

Lossiah was named to the Big Smoky Mountain All-Conference team this season and was named Honorable Mention the past two seasons.  Teesateskie, who surpassed the 1,000 career points mark last season, received All-Conference honors each of her four years as a Lady Brave.

Information from the game’s committee states, “The premier fund-raising project of the Rhododendron Civitan Club is sponsorship of the annual all-star basketball games featuring outstanding senior players from western North Carolina high schools. The games began in 1953 before the Rhododendron Civitan Club was founded. Sam Patton, a former All-American basketball player while in the U.S. Army in 1944, initiated and managed the games. The first game played in 1953 had ten players taking part in a scrimmage game inside the American Enka Corporation Gymnasium. Four college coaches accepted invitations to attend that game.”

It goes on to state, “The objectives of the games are two-fold. The first is to offer outstanding basketball players in western North Carolina the chance to display their skills before college coaches, thereby giving to some players the opportunity for a basketball scholarship and a college education which they could not otherwise afford. The second objective is to give the participants a chance to do something worthwhile for their fellow man. The talents and work of the players and coaches help those less fortunate to realize something that otherwise might not have happened had it not been for the money raised through these games.” 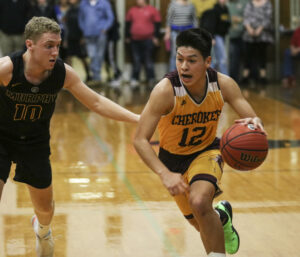 Josiah Lossiah, Braves senior shown dribbling by Murphy’s Reid Beal during the Big Smoky Mountain Conference tournament final on Feb. 22, has been selected to play in the Blue-White Game.

Following are the full rosters: