Four Cherokee varsity basketball seniors, two Lady Braves and two Braves, have been named to play in the upcoming West vs Midwest 1A All-Star games.  Jacee Smith, Jamie Lossiah, Blake Smith, and Nate Crowe will play on the West teams in the games at Mitchell High School on Saturday, March 23. 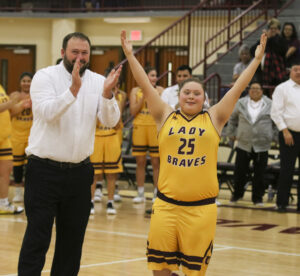 Jacee Smith, Lady Braves senior, right, shown with Lady Braves Head Coach Chris Mintz after she scored her 70th career point, has been selected to play for the West girls team in the West vs Midwest 1A All Star game. (SCOTT MCKIE B.P./One Feather photos)

Admission to the games is $7 with the girls game starting at 5 p.m. and the boys afterwards at 6:30 p.m.  A total of four boys and four girls will be selected to receive $500 scholarships.

“It’s an honor to be selected to any post-season game,” commented Chris Mintz, Lady Braves head coach, who noted he’s very proud of his players.  “Jamie is a four-year player who has done a lot for our program.  This is a great way to top off her career.  Jacee has been a blessing to have on our team.  She brings so much joy and fun to our team and now she will get to share it.  It should be a really good night.”

Aaron Hogner, Braves head coach, commented, “Blake is a tough competitor and is a really great teammate. He consistently was willing to do whatever was needed to help the team get better.  Nate fit in well with the guys being it was his first year with the team.  He had some key moments for us in games that helped the team’s success.  Both he and Blake will represent Cherokee High School really well in the All-Star game.” 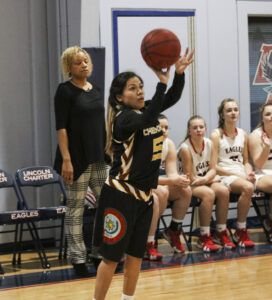 Jamie Lossiah, Lady Braves senior, has been selected to play for the West girls team in the West vs Midwest 1A All Star game.

Ethan Clapsaddle, Braves assistant coach, has been selected to be an assistant coach for the West boys team.  “It is a tremendous honor to be selected as one of the coaches for this game. Being able to help Coach Frank Maennle for this event is an awesome experience. I was blessed to be able to be his point guard in high school and he taught me how special being part of a team and basketball family can be. And then being able to work one more time with Nate Crowe and Blake Smith as members of this team is just icing on the cake. They are two tremendous student-athletes and first-class young men that represent the Eastern Band of Cherokee Indians community and Cherokee High School so well. We are all looking forward to this great opportunity.” 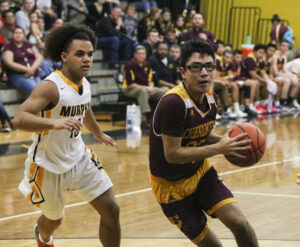 Nate Crowe, Braves senior, right, has been selected to play for the West boys team in the West vs Midwest 1A All Star game. 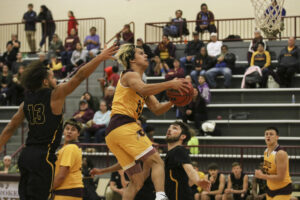 Blake Smith (#15), Braves senior, right, has been selected to play for the West boys team in the West vs Midwest 1A All Star game.

According to information from game officials, “The dream of having showcase games for small high school basketball players was born in 1982 when Bud Black, at the time head coach of the Cherryville Ironmen, developed a plan for the Southern District 7 Conference to play an all-star game for senior players.”