The Town of Franklin is looking at transferring the deed on Nikwasi Mound, a sacred site to the Eastern Band of Cherokee Indians (EBCI), to the nonprofit organization Nikwasi Initiative.  In a move during a meeting on the evening of Tuesday, March 5, the Franklin Town Council voted to move forward with drawing up the deed.

“Today, we have an opportunity to bring this story full circle in a manner that honors the original inhabitants of our town and the settlers who followed them here – but also honors the descendants of both groups, who are still here,” Barbara McRae, Town of Franklin Vice Mayor and co-chair of the Nikwasi Initiative, said in a statement.  “Deeding Nikwasi Mound to Nikwasi Initiative Inc. will give the Eastern Band of Cherokee Indians joint ownership with us and ensure that, in perpetuity, they share equally with us in its care and preservation.” 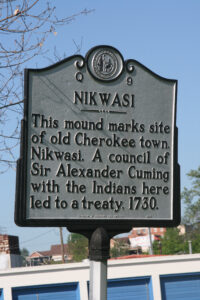 The Town of Franklin is looking at transferring the deed on Nikwasi Mound, a sacred site to the Eastern Band of Cherokee Indians (EBCI), to the nonprofit organization Nikwasi Initiative. (SCOTT MCKIE B.P./One Feather photos)

She stated that the Nikwasi Initiative, a partnership between the Town of Franklin, the EBCI, Macon County, and the Mainspring Conservation Trust, has been working, since 2013, to foster relationships between the groups involved in the Mound.  “This is an historic moment.  The next 200 years start now.  We can begin writing a new history based on mutual support, respect, and friendship.  Those are enormously powerful resources that can bring a brighter future to all of us.”

Once the actual deed is drawn up, it will be brought back to the Franklin Town Council for formal approval.

“The fact that we are where we are is, in itself, a testament to what can happen when cool heads prevail and partnerships are forged around something bigger than winning any battle,” Juanita Wilson, an EBCI tribal member and co-chair of the Nikwasi Initiative, told the One Feather in a statement.  “First of all, this is not a transfer of total ownership to EBCI.  It will be a joint ownership between the Town of Franklin, Macon County, and the EBCI through legal language in the transfer of the deed to the Nikwasi Initiative, which is a non-profit of community development nature.  Nikwasi Initiative will continue to report to the three entities on its work and will continue to seek input from them.”

Wilson gives a brief history of the Nikwasi Initiative, “Two years ago, people from the town of Franklin, Macon County, and the nation of the Eastern Band of Cherokee Indians came together to address a political controversy surrounding the Nikwasi Mound. Slowly, individuals from three different communities began to form one, concerned coalition of citizens who had strong ties to the mound.”

She added, “There was strong history to prove that the mound had been protected and cherished by the ancestors of all at the table. The group put the controversy in the past, where they decided it belonged, and began to work on plans to, collectively, bring the mound, and the lands that surround it, back to a deserved place of respect and honor. We named ourselves Mountain Partners because our desire was to, one day, expand our partnership beyond Macon County and the Cherokee Nation. We envisioned a heritage or cultural corridor; one that would tell cultural stories of many different nations: the Cherokee, Appalachia, Scottish and Irish people.  Mountain Partners’ vision grew beyond its capacity to further such a huge initiative and Nikwasi Initiative, the nonprofit, was born.”

Vice Mayor McRae further stated that the Nikwasi Initiative will install an information kiosk with interpretive panels at the Mound this spring.  They installed similar panels at the Cowee Mound site in September 2018.  She said preservation and enhancement efforts will continue at Nikwasi, “The Eastern Band has furthered efforts to enhance the area around the Mound through a significant investment in adjoining property.  Nikwasi Initiative has been an active partner in discussions relating to a possible museum annex/visitors center there.  As these efforts focus strongly on revitalization of this important section of Franklin, the potential economic benefit to the town and county is enormous.” 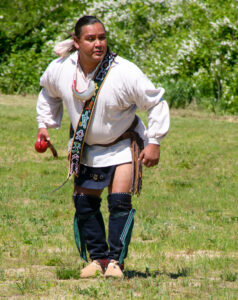 Ernest Grant, a member of the Warriors of Anikituhwa, dances at the Nikwasi Mound Celebration in 2008.

In August 2018, Tribal Council approved legislation to purchase a 0.59 acre tract of land that sits adjacent to the Mound.  Principal Chief Richard G. Sneed made the legislation, which approved the purchase price of $400,000 from Mainspring Conservation Trust, Inc., official by ratifying it in his office on Aug. 9, 2018.

Prior to ratification, Chief Sneed noted, “This is an opportunity for the Eastern Band, in partnering with Mainspring Conservation and Macon County and the Town of Franklin, for the Eastern Band to acquire cultural and historic lands that were our aboriginal homelands.  The long-term plan is to create a cultural corridor that preserves and protects historic sites for the Eastern Band, and this is just one more step in a long process that will continue until all of our lands that are important to us are protected and preserved.”

A controversy arose in 2012 as Town of Franklin workers sprayed herbicide on the Mound leaving dead, brown grass.  That led to tribal leaders, including then-Principal Chief Michell Hicks, asking for an official apology from the town.  Chief Hicks stated, at the time, that it was his wish for the Tribe to purchase the Mound.  “I would rather own the Mound and let us take care of it.  That would be my preference because I know that we’ll do the right thing.  The right thing to do, just like Kituwah, just like Cowee, is to bring it back into the hands of its original owners.”

Townsend noted there are 25 archaeologically-known mounds throughout western North Carolina.  Of those 25, he said the Tribe owns five including: Kituwah, Cowee, Nvnvyi, Birdtown, and Talulah.