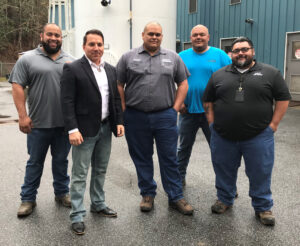 Representatives from the EPA inspected the Rough Branch Water System and the Snowbird/Cornsilk Community Water System in June 2018 and have just submitted their findings based on those site inspections and water samples inspected by the Water Treatment Program and the EPA.  Both sites were passed with high marks receiving no significant findings.  There were minor suggestions for improvement including upgrading fencing around the storage tank in Snowbird and upgrading an access door that proved slightly difficult for the EPA staff to open.  These minor upgrades will be remedied in approximately 60 days.

Author “Twoleaf” Sluder is the supervisor of the Water Treatment Program and is responsible for overseeing the testing of these water tanks and ensuring all our communities have safe drinking water.  Two Leaf has a dedicated team he works with to collect samples, test water, and inspect tanks.  The tanks mentioned are checked daily to confirm they are working properly, and the water contained is of the highest quality.

Sluder, who has worked for the program for approximately 20 years, says, “I appreciate the attention and concern Principal Chief Richard Sneed has demonstrated in the work we do here at Water Treatment.  During my tenure with Water Treatment, I have not seen any previous leadership who had such concern for the safety of our Cherokee water.  I consider it a privilege to serve the Tribe in this way and appreciate all the support I get to do my job well.”

Chief Sneed added, “I appreciate all the hard work done by our Water Treatment Program staff.  They are highly certified to do what they’re responsible for and I have full faith in the work they do for the EBCI.”

– Office of the Principal Chief release