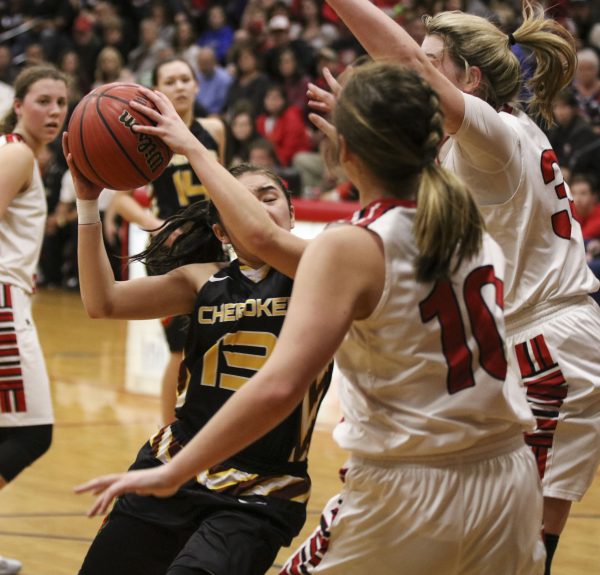 PILOT MOUNTAIN – The Cherokee Lady Braves (23-6) finished their 2018-19 season with a barn burner in the third round of the 1A state playoffs against the top-seeded East Surry Lady Cardinals.  The game, held at East Surry on the evening of Saturday, March 2, went into overtime and saw the Lady Cardinals edge Cherokee 79-76.

“This season was a great ride,” said Chris Mintz, Lady Braves head coach.  “We had a lot of success on and off the court.  Yesterday was heart-breaking as the girls put so much time and effort into this season.  I’m so proud of where we started to where we finished taking the number one team in the state to overtime on their home court.”

He added, “If you listened to or were at the game, you know they laid everything they had on the court.  It is always heart-breaking for the seniors who won’t have a chance to put on the jersey again.  We will miss them but appreciate all they have done.  I would like to thank everyone who supported us.”

The game started out poorly for the Lady Braves who fell behind early trailing by as much as 17-2.  But, they weathered the storm and got to work on knocking down that deficit.

East Surry led 27-13 after the first period.  The first few minutes of the second period were relatively even and Cherokee trailed 32-20 with just under four minutes left.  Some tight defense led to several turnovers, and the Lady Braves were able to cut more into East Surry’s lead to only trail 35-30 at the half.

The third period was dead even with both teams scoring 16 points, and Cherokee trailed 51-46 going into the fourth period.

That’s when it got interesting. 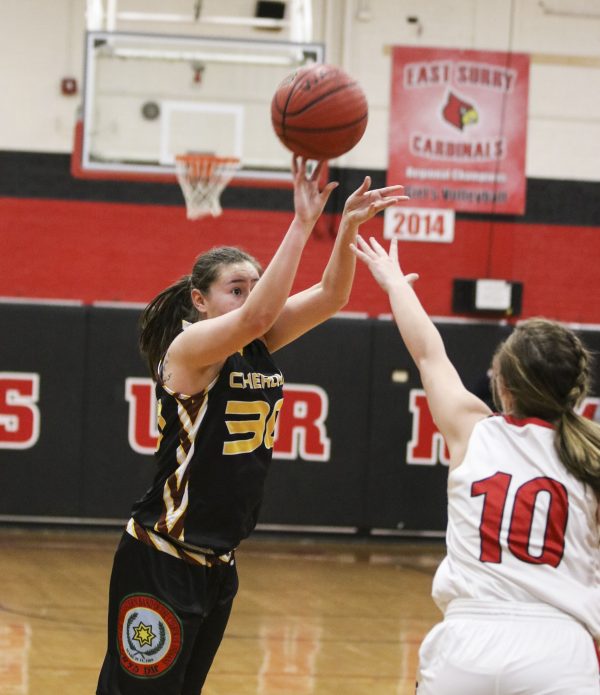 Cherokee came out for the fourth gunning and cut the lead to three points.  Then, Deante Toineeta, Lady Braves sophomore who led Cherokee on the night with 31 points, hit a three-point shot from just left of the top of the key to tie the game at 56-56 with just over five minutes left in regulation.

The teams traded baskets for the next few minutes.  Then, with 2:53 left in regulation, Vivian Ross, Lady Braves freshman, was fouled and hit her two free throws to put Cherokee in the lead (62-61) for the first time in the contest.

Naomi Smith, Lady Braves sophomore, hit a lay-up and was fouled with just over one minute left.  She hit her extra free throw to put Cherokee up 65-61.  Raylen Bark, Lady Braves junior, was fouled on the next trip down the court.  She knocked both shots home and Cherokee led 67-61 with 43.9 seconds left.

On the next trip down the court, a double technical foul occurred between Tori Teesateskie, Lady Braves senior, and East Surry’s Ella Sutphin.  Both players were given two shots and they both knocked them down.  Cherokee led 69-63.  From there, Sutphin took over scoring the last six points of the period on two shots and two free throws to tie the game at 69-69 sending it to overtime.

East Surry outscored Cherokee 8-4 in the opening minutes of the overtime period to lead 77-73 with just over one minute left.  Toineeta hit a three-point shot several seconds later to bring the game to 77-76.  Then, with 21.2 seconds left, East Surry’s Dasia Lambert hit two free throws which proved to be the game winner. 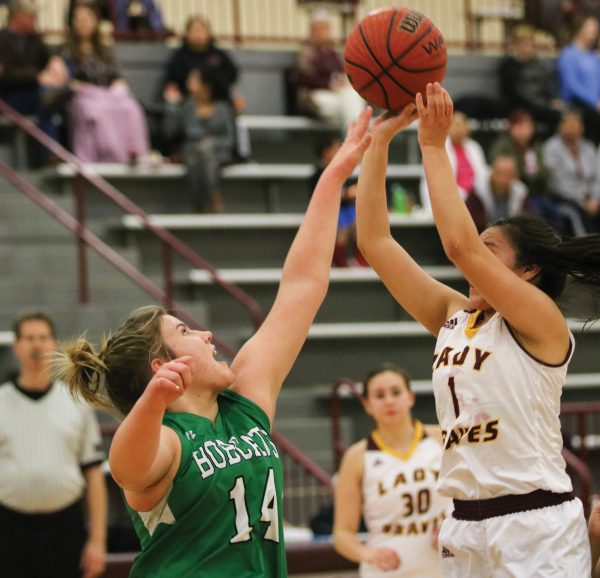 Cherokee’s Raylen Bark (#1) shoots over Blue Ridge Early College’s Madeline Potts during a first round playoff game at the Charles George Memorial Arena on the evening of Tuesday, Feb. 26.

The Lady Braves started out the playoffs at home against the #24 Blue Ridge Early College Lady Bobcats on Tuesday, Feb. 26.  The game started out very even with Cherokee holding a slight 8-7 lead midway through the first period and leading only 16-15 at the end of the first.

The Lady Braves came out gunning in the second period going on a 13-0 run for the first three minutes.  They took a 37-27 lead into the locker room.  Cherokee opened it up even more in the second half leading 58-35 at the end of the third and cruising to a big 82-46 win.

Two nights later, on Thursday, Feb. 28, Cherokee traveled to #8 Lincoln Charter where they faced the Lady Eagles.  This game was all Cherokee from the opening tip-off as they cruised to a 68-35 win.

Donning new black uniforms featuring the seal of the Eastern Band of Cherokee Indians on the shorts, the Lady Braves jumped out to an 8-0 lead in the first two minutes of the contest.  They led 17-10 at the end of the first behind a stingy, full-court press defense.

The third period was all Lady Braves as they went on an 11-2 run in the first three minutes to lead 50-21.  Vivian Ross, Cherokee freshman, hit a three-point shot at the 2:53 mark of the period to put the Lady Braves up by 40 points (61-21) and invoke the NCHSAA mercy rule and a running clock for the remainder of the contest.