In the past few years, we have been lucky to have a program emerge here in Cherokee that has entertained and brought a finer part of life to us.  The Cherokee Performing Arts Program, comprised of middle school and high school students at Cherokee Central Schools, has raised the bar on school theater productions statewide.

Formerly the Cherokee Musical Theater Department, the program has been going strong for several years.  Starting with “The Lion King Jr.”, the first musical production in the history of Cherokee High School in 2016, the program has done four musicals in all (“Beauty and the Beast” in 2017, “Shrek” in 2018, and a middle school production of “Aladdin Jr.” earlier this year).

At the helm of the program is Michael Yannette.  He is the director of choirs and musical theatre at Cherokee Central and is the biggest fan and cheerleader for the students themselves.  Since the program began, I’ve had the pleasure of interviewing him several times for features on their events, but my first interview with him, prior to the production of “The Lion King Jr.”, speaks volumes on his dedication to the students.

“They’re awesome kids,” he told me.  “They are doing an amazing job, and I’m just super, crazy proud of them.” 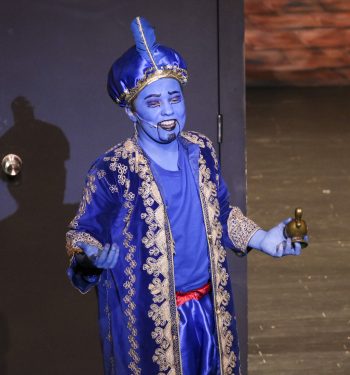 William Baily IV plays the part of the Genie during the opening night performance of “Aladdin Jr.” by the middle school students in the Cherokee Performing Arts Program at Cherokee Central Schools. The performance, the first musical by Cherokee Middle School students, was held at the Chief Joyce Dugan Cultural Arts Center on the evening of Thursday, Feb. 14. (SCOTT MCKIE B.P./One Feather)

When he started at the school several years ago and around 16 months prior to this first interview, there were just a few students in his chorus.  Now, the program has grown leaps and bounds with students not only performing but also taking on and learning the ‘back of the house’ jobs too such as lighting, stage design, and more.

Yannette’s right-hand person is Chryssie Whitehead Disbrow, a master class teacher and choreographer with Broadway and television credits.  Her specialty is dance and choreography, an addition that has been seen in recent productions at the school.  But, her real specialty is her enthusiasm and attitude.

Like Yannette, the students and their futures come first for Disbrow.  “I just want them to do what they’re supposed to do with their lives and embrace their own personal mission in life, whatever that ends up being,” she told me in an interview last year.  “I always want them to go out and experience.”

And, those attitudes are inspiring the students.  Last spring, three students, including one senior, were notified that they had been accepted to the prestigious American Musical and Dramatic Academy (AMDA) with campuses in New York City and Los Angeles.  Eason Esquivel, a member of the Eastern Band of Cherokee Indians and CHS Class of 2018, is currently enrolled at the school.

“I always knew I wanted to do something with the arts,” he told me in an interview last April.  “I’ve toured a lot of art schools.  When we went to AMDA, something just clicked there that I’ve never felt at any of the other schools I’ve visited.  “I really feel that is where I’m going to belong and that’s where I am going to do the best.”

Students in performing arts gain many benefits from their programs including increased self-esteem, ability to work well in groups, increased confidence, and more.

In an article published on the website of the National Federation of State High School Association, an organization generally associated with sports, entitled “Students gain many benefits from involvement in theatre”, John Coon wrote, “Sure, there is a need for athletics, community activities, and volunteer groups.  However, theatre is the one area that almost everyone uses – directly or indirectly – in the world as they go through this experience we call life.”

He went on to state, “A person simply cannot say that theatre arts does not have an importance in the development of a teenager’s life.  It is a key to how they can become an adult and deal with other people in this crazy world.  It allows them to look at the mirror of the world and see themselves and what they can do to be a welcomed part of it.  It provides for them an outlet they might have never found and gives them confidence to be a part of something that will build character, ambition, education, and desire.”

A 2013 Australian study titled “The Role of Arts Participation in Students’ Academic and Non-Academic Outcomes: A Longitudinal Study of School, Home, and Community Factors” looked at 643 students there from 15 different schools.  Professor Andrew Martin, the study’s lead author, was quoted in an article on phys.org, “The study shows that school participation in the arts can have positive effects on diverse aspects of students’ lives…it shows that the arts can impact broader academic and personal wellbeing outcomes for young people.  This study provides new and compelling evidence that the arts should be central to schooling and not left on the fringes.”

The program is currently gearing up for a spring production of the musical “Into the Woods”.  Check the One Feather for more information on those performances soon.