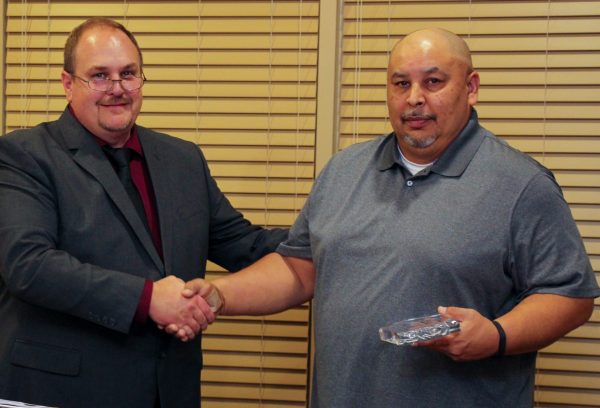 The Frell Owl Award is given annually by the Cherokee Boys Club to those who give long-standing, exemplary service to Cherokee youth.  This year’s award, the 32nd annual, went to Isaac “Ike” Long, Wolftown School Board representative who frequently volunteers his time for youth sports, during the annual banquet held at the Chestnut Tree Inn on the morning of Wednesday, Dec. 19.

“The Frell Owl Award is given to those who best exemplify the character and accomplishments of the late Frell Owl – Cherokee educator and civic leader, and to those who have significantly contributed to the welfare of Cherokee children and families,” said Greg Owle, Cherokee Boys Club general manager.

He then read the unattributed nomination letter for Long, “It is an honor to recommend someone so committed to the community and involved in helping our youth.  This person has been an active, positive volunteer in the community for youth sports leagues along with the middle and high school sports for over 15 years.  He has dedicated much of his spare time to Cherokee Central Schools beginning with serving as a high school Booster Club president (8 years), and he is currently volunteering 10 to 20 hours per week working with the Braves and Lady Braves as a clock operator.”

The letter continued, “He is a constant and stable fixture in the athletic parts of the school.  He cares about the student-athletes and expresses his dedication year after year, sport after sport.”

The nomination letter went on to say, “He truly serves unselfishly and is always exhibiting loyalty, dependability, and is a constant support for our young people.  These qualities have helped this person be successful throughout his life.”

Long stated after receiving the award, “It’s an honor to be nominated, let alone win an award like this.  I don’t dedicate my time for awards or recognition.  I just do it for the youth, and I’ll continue to do it as long as I can.”

Owle said the long-time Frell Owl Awards “says a lot about our community and investment that is put into the lives of our future generations”.