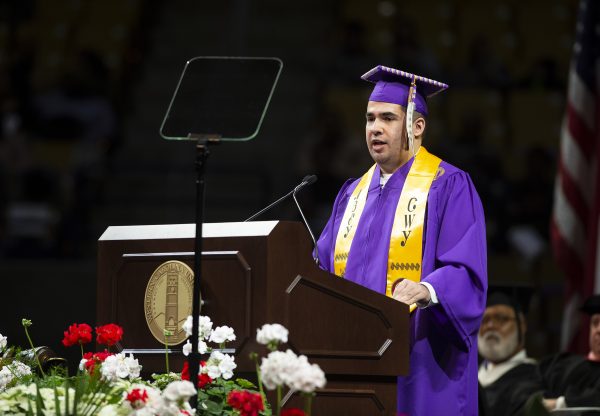 Graduating student Driver Blythe, an enrolled member of the Eastern Band of Cherokee Indians, delivers the primary address at the commencement for WCU’s College of Arts and Sciences, College of Education and Allied Professions, and David Orr Belcher College of Fine and Performing Arts on Saturday, Dec. 15. (WCU photo)

CULLOWHEE – A pair of graduating students delivered the primary addresses Saturday (Dec. 15) as Western Carolina University held commencement exercises to recognize the academic accomplishments of its fall class and a group of alumni who completed requirements to receive their degrees last summer.

WCU’s fall class includes about 765 students who recently have been finishing academic work for their degrees. Members of the fall class were joined in the ceremonies by alumni who completed academic requirements during summer school and who already have received degrees.

James Driver Blythe, a criminal justice major from Cherokee, addressed his fellow graduating students and others in attendance during the morning commencement. An enrolled member of the Eastern Band of Cherokee Indians, Blythe is believed to be the first Native American student ever to deliver the primary address at a WCU commencement. He spoke about the opportunities that have been provided to him at WCU, including serving as vice president of the campus Native American student organization, traveling to Washington, D.C., to meet with political leaders and journeying around the world to New Zealand do conduct field work and community service.

Blythe told the audience that his most memorable accomplishment at WCU was being asked to be the guest speaker at the WCU Department of Intercultural Affairs graduation celebration last spring, where he spoke about his life as a tribal member and what it would mean to him to receive a college degree. He then relayed to the audience statistics indicating that only 10 percent of Native Americans in the U.S. graduate from college, while the number for the overall population is 20 percent. Blythe said those numbers “are a constant reminder that I must strive to succeed so that this number increases on behalf of all Native American students across the U.S., but also to directly impact our young people within my community.”

“WCU has welcomed me and numerous other enrolled members with open arms from day one,” he said. “This degree will prove to many that it can and will be done. My peers need to know that we can succeed and become the future that we desire to be.”

The son of Terri Taylor and Larry Blythe, Driver Blythe said his after-graduation plans include working in case management or juvenile services, dedicating his efforts to assisting young people who find themselves in criminal hardship and improving his community.

Emma Mahala Mooney, a Dobson resident who earned her business administration and law degree as a distance student, provided remarks for the afternoon commencement. She told the audience that her late grandmother had a wise saying: “Life is like a spider’s web.”

“Just like spiders, we begin to weave our web,” Mooney said. “We work to connect the web – our movements intentional and our outcome purposeful, one step at a time, never truly knowing what it looks like until the very end. But once it is complete, it is this beautiful design that will never again be replicated. The college journey that we have taken thus far is much like this, too. Each of us is so different, but we all have shared the same goal. Semester by semester, day by day – some of us, perhaps, assignment by assignment – we have worked tirelessly to make this happen.”

Mooney issued several challenges for the graduating students, alumni and other audience members. “First, be mindful of yourself and others, recognizing the significance of your actions and the impact that you have on others,” she said. “Second, learn when it is time to think and when it is time to act, because the difference can be crucial. And finally, once you are ready to act on your change, be patient and take small steps, but also move with the tenacity to get you where you are trying to go, just like the spider weaving his web. It will be sticky and sometimes you may not know exactly how it all comes together, but strand by strand, you will work toward the completion of a beautiful web.”

Mooney is currently employed as an account manager for the benefits administrator ProBenefits Inc. She said her plans for the future include furthering her career at that business while looking for opportunities to engage in her passion of business development. She is the daughter of Candy Lowe and Scott Mooney.

Another WCU distance student who participated in the afternoon ceremony, Ivana Babic Deschenes, traveled all the way from Bellevue, Washington, to get her diploma. Deschenes, who earned her master’s degree in project management, had never set foot on the WCU campus until she arrived in Cullowhee for commencement Saturday.

WCU Interim Chancellor Alison Morrison-Shetlar delivered the charge to the graduating students and alumni. “Graduates, each of you have worked diligently, passionately and tirelessly, earning the distinct privilege to be seated before us today,” she said. “You have believed in your dreams. You have set sights on your goals. You have completed all the difficult and necessary tasks to reach this day, a day that represents one of the most significant milestones in your lifetime. A milestone that makes possible a future of unlimited possibilities.

“Graduates, it is now up to you to create the world in which you wish to live,” Morrison-Shetlar said. “It is your freshly born ideas that will create sustainable environments, it is your vision of the future that will eliminate poverty and hunger, it is your ability to take your educational experience and apply it to create international innovation and collaboration, and most importantly, it is your ability to believe in peace, justice and equality that will make those a reality for all. Graduates, the future is yours and the world is counting on you.”

Other speakers for the ceremonies included Bryant Kinney, vice chair of the WCU Board of Trustees, who congratulated the graduating students and alumni on behalf of the trustees and University of North Carolina System leadership; and Ed Holland, president of the WCU Alumni Association.

Both commencements included recognition for all the graduating students and recent alumni who are active duty members of the military, veterans or members of the National Guard and Reserves. Those students were distinguished by red, white and blue honor cords.

A complete list of the university’s new graduates will be announced following the posting of grades from final examinations.