BRYSON CITY – The Cherokee Lady Braves (3-0) led the entire game as they remained unbeaten with a big 79-51 win at Swain County on Friday, Dec. 14.  Deante Toineeta, sophomore guard, led the way for Cherokee with 23 points followed by Tori Teesateskie, senior guard, with 19.

“I thought we played really well tonight,” said Chris Mintz, Lady Braves head coach.  “It’s probably the best game that we’ve played this season.  We’re just going to keep getting better and better, and as we get into game shape, it’ll become easier and easier.  I thought our defense and our pressure was the difference.  We made them turn it over a lot and we made some great shots.” 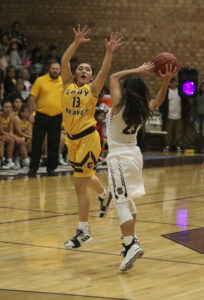 Cherokee’s Deante Toineeta, sophomore guard, tries to block a pass from Bri Ross, Lady Maroon Devils sophomore, during a game at Swain on Friday, Dec. 14. Toineeta led all scorers with 23 points on the night as the Lady Braves won 79-51. Both ladies are members of the Eastern Band of Cherokee Indians. (SCOTT MCKIE B.P./One Feather photos)

The Lady Braves kept the pressure on the Lady Maroon Devils from start to finish.  When asked how they can keep up that pace throughout a game, Coach Mintz noted, “We run like crazy in practice, and we practice against ourselves on pressing.  They don’t quit and they hustle all the time.  That’s a credit to them and how hard they work to get ready for it.”

Cherokee scored the first seven points of the game and had extended a 16-5 lead five minutes in.  By the end of the first period, the Lady Braves led 21-10.  They hit a hot streak in the second period and extended that lead to 42-18 at the half.

The Braves (1-2) had another barn burner on Friday night as they came up just short to the Maroon Devils 84-82 after having trailed by as many as 13 points in the second half. 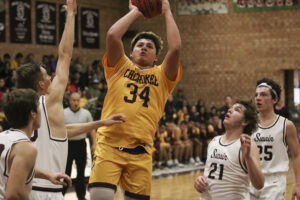 Sterling Santa Maria (#34), Braves junior forward, goes for a shot over several Maroon Devils players during a game at Swain on Friday, Dec. 14. He finished the game with 10 points.

Cherokee got out to a good start in the game scoring the first seven points and leading 12-2 midway through the first.  Swain got going in the final minutes of the period and only trailed the Braves by four points (21-17) at the end of the first.

The teams tied up in the first two minutes of the second and went back-and-forth for most of the period.  Swain hit some shots in the final minute and took a 40-34 lead into the locker room.  The third period was tight and Cherokee outscored the Maroon Devils 14-12 to only trail by four (52-48) going into the fourth.

Swain came out for the final period on fire and took a double digit lead midway through.  Cherokee, trailing 66-54 with 4:40 left in the game, went on a 20-8 run to get right back into the contest.  The Braves trailed by four points for most of the final minutes, cutting the lead to three with six seconds left, but ended up just short as Swain took the 84-82 win.

To view or purchase photos from the Lady Braves game, visit: https://onefeather.smugmug.com/SPORTS/BASKETBALL/BRAVES-2018-19/At-Swain-December-14/

To view or purchase photos from the Braves game, visit: https://onefeather.smugmug.com/SPORTS/BASKETBALL/BRAVES-2018-19/At-Swain-December-14/