Following several postponements due to weather and other factors, the Cherokee Braves (1-1) and Lady Braves (2-0) finally got to play their home opener.  The teams swept Hayesville at the Charles George Memorial Arena on the evening of Wednesday, Dec. 12.  The Lady Braves won 74-59 and the Braves won an overtime thriller 52-49.

“I think the pace of the play was the way that we wanted to go,” said Chris Mintz, Lady Braves head coach.  “We’re still turning the ball over too much, but our defense tonight was really good.  We played hard.  It’s still early in the season.  I wasn’t sure that we could maintain that pace for the entire game.  We came back in the second half and went straight man and that seemed to help us out.” 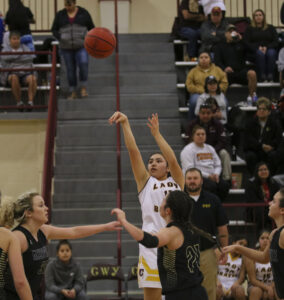 Cherokee’s Deante Toineeta (#24), sophomore guard, shoots over several Hayesville players during a game at the Charles George Memorial Arena on the evening of Wednesday, Dec. 12. She ended the game with 23 points. (SCOTT MCKIE B.P./One Feather photos)

Coach Mintz said he’s hoping the team will continue to improve as the season goes along due to game time.  “We’re tired of practicing against each other.  There’s nothing like game experience.  We’ve got some young girls that need to play in some games so this is good for them.  It’s hard because the second game of the year was a conference game.”

The Lady Braves opened it up more in the second period, leading by as many as 12 at one point, and took a 42-33 lead into the locker room.  Cherokee led by 7 points (46-39) three minutes into the third before going on a 9-3 run to lead 55-42 with just over two minutes left in the period.  Cherokee led 58-45 at the end of third and extended that lead to as many as 18 in the fourth before Hayesville started coming back.  The Lady Yellow Jackets went on a 13-4 run late to cut the lead to 8 (67-58) with two minutes left in the game.  But, the Lady Braves pushed hard the last few minutes and ended up winning 74-59.

The Braves game was a barn-burner.  “I’ll take the win, but we’ve got a long way to go,” Aaron Hogner, Braves head coach, said after the overtime win.  “This group needs to find their identity.  We lost three big guys last year – Holden (Straughan), Tye (Mintz), and Justus (Day) – that gave us that spark offensively when we needed it, and this team is still searching for our identity.  We’ll be fine.  We will get in shape and get some continuity on the offensive end.”

Both teams got off to a slow start with Cherokee leading 8-6 at the end of the first and 20-18 at the half.  In the third, Cherokee held a 4-point lead for most of the period.  Hayesville did tie it up at 26-26 with 1:58 left in the third, but the Braves scored the last five points of the period to lead 31-26 going into the fourth. 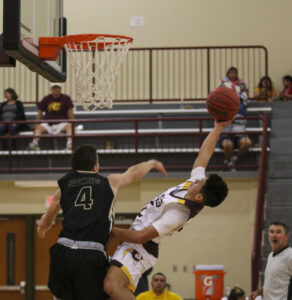 Hayesville caught up in the first few minutes of the fourth and took the lead with about a minute left.  The Yellow Jackets led 44-41 with 41 seconds left in regulation.  Nine seconds later, Tihjah Lossiah, senior guard, hit a three-point shot from the left corner to tie the game at 44-44 which is how it would end in regulation.

Now, on to the four-minute overtime.

Hayesville’s Hayden McClure got things going with a bucket at the 2:35 mark to give the Yellow Jackets a two-point lead.  Josiah Lossiah, Braves senior guard, answered as he knocked down a 3-point shot from the top of the key to give Cherokee a 1-point lead (47-46) – a lead they would not relinquish as they went on to take the 52-49 win.

To view or purchase photos from the Braves game, visit: https://onefeather.smugmug.com/SPORTS/BASKETBALL/BRAVES-2018-19/Vs-Hayesville-December-12/

To view or purchase photos from the Lady Braves game, visit: