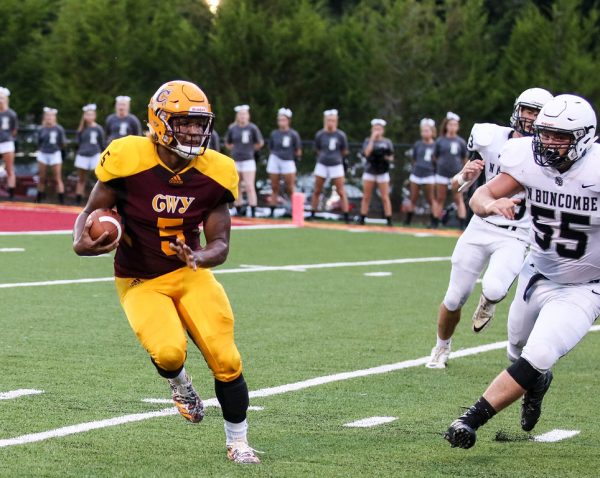 Isaiah Evans (#5), Braves senior running back, has been selected to play for the North Carolina squad in the 82nd Shrine Bowl of the Carolinas to be played at Wofford College in Spartanburg on Saturday, Dec. 15. (SCOTT MCKIE B.P./One Feather photos)

For the second year in a row, a Cherokee Brave will be on the roster for the Shrine Bowl of the Carolinas which pits some of the best seniors from North Carolina against their South Carolina counterparts.  Isaiah Evans, senior running back, will participate in the 82nd Annual game to be played at Wofford College’s Gibbs Stadium in Spartanburg, SC on Saturday, Dec. 15 at 1 p.m.

Joining him will be Kent Briggs, Braves head coach, who will serve as an assistant coach for the North Carolina squad in the game.  Evans is the only player from the Smoky Mountain Conference selected for the game.

“It’s a great honor for Cherokee High School and our football program to have players in back-to-back years chosen for the Shrine Bowl,” said Coach Briggs.  “It is evidence of some great hard work for those two young men, but it’s also a team award because when someone does well it takes a whole team to help that person succeed.  It’s a great tribute to our entire football team.”

Coach Briggs said he is most excited to be able to represent Cherokee at the game and really get the Braves out there in the spotlight.  “I look forward to working with some really great players, guys that you’ll see playing on TV in college and the NFL.  It’ll be a fun week for us.” 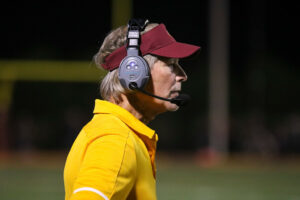 Kent Briggs, Braves head coach, has been selected to serve as an assistant coach for the North Carolina squad.

He said he’s really excited for Evans.  “It will be a great opportunity for him, not only for the experience of playing with some of the best players in the Carolinas, but it also gives him a chance to go out there and compete and give himself some exposure and prove how he can play with the great players in the two states.  It’ll definitely be a chance for him to showcase what his abilities are.”

And, Coach Briggs thinks Evans’ skills are just beginning to be honed.  “I think he is still an untapped player that has a tremendous amount of potential that he hasn’t even reached yet.  I’m excited.  I think he is the type of player where we’ll see something really big happen within the next couple of years.  I think this is a great opportunity for him to put himself in a good position to do that.”

According to information from the Shrine Bowl, “The Shrine Bowl of the Carolinas was first played on Dec. 4, 1937 in Charlotte, N.C., making it the oldest high school football all-star game in the nation.  The annual game, featuring many of the top high school players from North and South Carolina is played to benefit the Greenville (S.C.) Unit Shriners Hospital for Children and the 21 other Shriners Hospitals for Children across the nation.”  They state that over $75 million have been raised since the game’s inception.