Acclaimed Cherokee artist passes away at 61 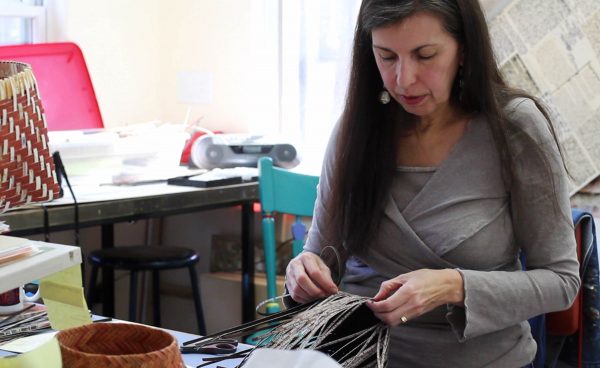 Shan Goshorn, noted EBCI artist, shown working on a project, passed away at the age of 61 on Saturday, Dec. 1. She was known worldwide for her unique take on traditional Cherokee basketry frequently utilizing photographs and images to make her splints. (Photo courtesy of Tulsa World)

Shan Goshorn, a member of the Eastern Band of Cherokee Indians who was currently living in Tulsa, Okla., passed away on Saturday, Dec. 1 at the age of 61.  She was known worldwide for her unique take on traditional Cherokee basketry frequently utilizing photographs and images to make her splints.

The day after her passing, SWAIA – Santa Fe Indian Market issued a statement saying, “The Native art world has lost a giant.  Shan Goshorn was one of a kind, much like her art.”

Following her selection as a Fellow two years ago, she told the One Feather, “Although I did not learn weaving the traditional way of sitting at a relative’s knee to learn this skill by observation, I acknowledge and thank all the people whose work I have examined to understand the math and rhythm of basketweaving.  The Cherokee are known for their exquisite basketry.” 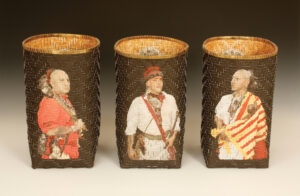 Goshorn won three major awards at the SWAIA Santa Fe Indian Market in August 2013 with this set of three baskets entitled “They Were Called Kings”. She won first place in her division, best of category, and best of classification for the basket inspired by the Emissaries of Peace exhibit at the Museum of the Cherokee Indian which features three members of the Warriors of Anikituhwa including Sonny Ledford, Mike Crowe, and Kody Grant. (File photo)

She said her love of Cherokee baskets started in her teens.  “These baskets have fascinated me ever since I worked at the Qualla Co-Op as a teenager and learned the lengthy process of gathering and preparing supplies as well as identifying the variety of intricate patterns.  I am grateful to all the ancestors who aided and literally directed my research in museum archives.  They continue to inspire me.”

Goshorn received a Bachelor’s of Fine Arts degree from the Atlanta College of Art and moved to Tulsa soon thereafter.

“Shan was a wonderfully-talented artist who was very proud of our culture and represented our Tribe in a very creative, emotional, and powerful way,” said Robin Swayney, Museum of the Cherokee Indian genealogist and archivist and a friend of Goshorn.  “She took her artistic ability to a whole new level.  She was a wonderful and passionate speaker, and her inspiration, work, and legacy will live long in our culture.”

Many of Goshorn’s works over the years took a stance on various native issues from challenging the idea of stereotypical depictions to raising awareness of historical trauma.

In an article in First American Art Magazine, published Fall 2013, JoKay Dowell wrote, “Weaving the history of her Cherokee grandmother’s people with spirituality and creativity into beautiful, sometimes haunting, works of art, Goshorn leaves a legacy of activism entwined with art, inciting future generations to stand confident in who they are.”

A memorial service is set for Goshorn on Saturday, Dec. 29 at 2 p.m. at the Gilcrease Museum in Tulsa.  According to the obituary printed in the Tulsa World, “Goshorn’s survivors include her husband of 33 years, Tom Pendergraft; a son, Loma Pendergraft; daughter, Neosha Pendergraft; three stepdaughters, Natalee, Carolee, and Sommer Pendergraft; her mother, Edna Goshorn; and two sisters.”