The lands of the Eastern Band of Cherokee Indians will be designated as a Purple Heart Community thanks to the passage of a resolution submitted by the members of the Steve Youngdeer American Legion Post 143 and the Post 143 Ladies Auxiliary.  Res. No. 439 was passed unanimously by Tribal Council during its regular session on Thursday, Dec. 6. 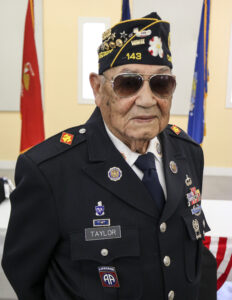 Reuben Taylor, an EBCI tribal elder, is a World War II veteran and the recipient of both the Bronze Star and the Purple Heart. He and other recipients of the Purple Heart, given to those wounded in combat, will be honored as the lands of the Eastern Band of Cherokee Indians will be designated as a Purple Heart Community thanks to the passage of a resolution, submitted by the members of the Steve Youngdeer American Legion Post 143 and the Post 143 Ladies Auxiliary, during Tribal Council on Thursday, Dec. 6. (SCOTT MCKIE B.P./One Feather)

“It saddens me every day to see veterans that are not being recognized and are being left in the shadows by our communities,” said Sgt. Gregory Hunt, Steve Youngdeer American Legion Post 143 and a Marine Corps veteran.  “This resolution will help us bring those that gave the ultimate sacrifice in combat for this country and gave us our freedom and help them come out of the shadows and be recognized by all who enter the Qualla Boundary, Snowbird, all Eastern Band Cherokee Indian tribal land.  The resolution will be recognizing any Eastern Band Cherokee Indian or anyone in the community that has received the Purple Heart which is the third highest personal combat award or decoration.  That means that they were wounded on the battlefield.  They were wounded or they gave up their life completely for our freedom.”

Hunt said the signs will be paid for by an anonymous donor and will not cost the Tribe nor the Post any money with a total of 10 signs being placed around the Qualla Boundary, Snowbird Community, Cherokee County Community, and anywhere else deemed appropriate.

The legislation states in part, “…throughout the Qualla Boundary there are many veterans that served its country and Tribe with honor and distinction and were wounded in battle defending this nation and Tribe.  Some wounded multiple times and having received the Purple Heart, the nation’s oldest military award, for their unselfish service.  The Purple Heart is awarded to members of the armed forces of the U.S. who are wounded by an instrument of war in the hands of the enemy and posthumously to the kin in the name of those who are killed in action or die of wounds received in action.  It is specifically a combat decoration.”

According to the legislation, Post 143 officials and the North Carolina Department of Transportation will collaborate to get the proper signage that identifies the Qualla Boundary as a Purple Heart Community. 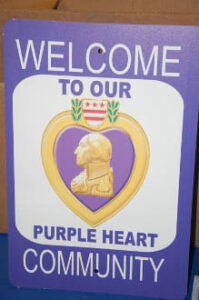 As part of the legislation, a proclamation was submitted to designate April 13 as Purple Heart Day on tribal lands of the EBCI.  Hunt noted, “The reason for that day is that is the birthday of one of our greatest heroes among our people.  That is Chief Robert S. Youngdeer’s birthday – being a Purple Heart recipient, former Principal Chief of the Eastern Band of Cherokee Indians, and a true American hero not just to Cherokee people but to all people across the country.  I think that would be a fitting day to be designated as the annual Purple Heart Day among the Cherokee people.”

Yellowhill Rep. Tom Wahnetah commented, “This is will be a great honor recognizing the veterans that have received the Purple Heart.  My grandfather is one of them.”

Later on in Thursday’s agenda, Council tabled Res. No. 442, to add a veteran distinction on EBCI enrollment cards and to waive the $10 fee for card processing for all honorably discharged veterans.  The legislation garnered unanimous support, but the issue is being sent to the Enrollment Committee to work with Donald T. Thompson, the legislation’s submitter, as well as members of Post 143 to come up with a suitable design before bringing it back on the floor for a final vote.

The project to add the names was paid for by the Office of the Vice Chief and Vice Chief Alan B. Ensley commented, “We support the American Legion and the members of all the U.S. Armed Forces and we proudly support the efforts to promote their recognition.”

Post 143 officials are currently gathering names to be added in November 2019.  If you are an EBCI veteran or know of one who is not currently listed on the wall, contact Warren Dupree 508-2657 or David McQueen 736-9572.