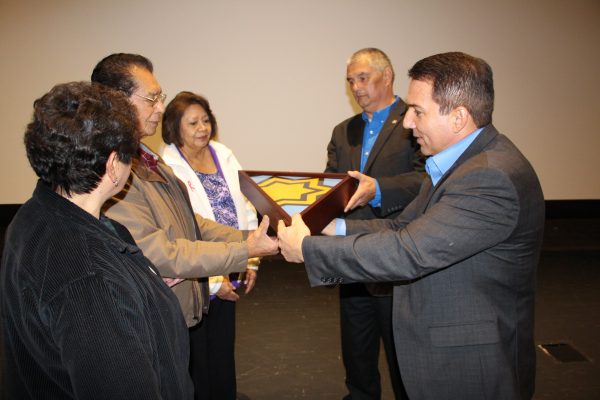 The life, smile, wisdom, and wit of the late Amanda Swimmer, Beloved Woman of the Eastern Band of Cherokee Indians, were remembered at a memorial event held at the Chief Joyce Dugan Cultural Arts Center on the evening of Tuesday, Dec. 4.

“I am going to keep it simple and short as Grandma was a humble person and probably wouldn’t want us to be making a big deal about her,” said Cherokee Tribal Court Judge Shannon Swimmer, Amanda’s granddaughter, who opened the program with words from the family.  “But, she was a big deal, and she deserves to be celebrated and honored and remembered.”

She added, “Grandma was many things in this life.  She lived a simple life, but she also lived an extraordinary life.  She is going to be remembered for her contributions as a potter, as an educator, as a bearer of our traditions, and as a Beloved Woman.  But, to us, she’ll best be remembered for the things that she did best and that was being a grandma and mom.”

Dvdaya Swimmer, Amanda’s great granddaughter, sang “Amazing Grace” in the Cherokee language followed by a performance by the Aniyvwiya Analsgisgi Singers & Dancers.  Micah Swimmer, Amanda’s grandson, sang for the group and noted prior to their dances, “Grandma was a big influence and guide in my life.”  He said she helped him learn various songs and dances including the Eagle Dance which had several parts to it she told him about that he previously was not aware were part of that particular dance including the Peace Pipe Dance portion. 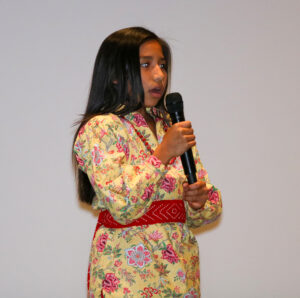 Following those dances, Principal Chief Richard G. Sneed spoke stating, “She was a mother to her community and a grandmother to her Tribe.  And, like any good mother, she could be gentle or she could be stern – whatever the situation called for.  But, no matter what, two things that you always knew when you were in her presence; first, that she genuinely loved everyone that she met and second, that she would be praying for you from that moment forward.  She was the embodiment of the values that we hold dear as Cherokee people – compassionate, caring, graceful, and forgiving.”

Chief Sneed went on to say, “People like Amanda, who come into our lives, can never be replaced because they were never meant to be.  Instead, it is our duty and our obligation to live out the lessons that she taught each and every one of us.  Amanda has left a legacy, and that legacy is you and me.  Her life and prayers live on in the hearts and the minds and the lives of everyone in her family and every member of this Tribe.  It is my prayer that, during this time of mourning, that you would choose to be filled with joy for she is in the presence of her God and she is rejoicing and we rejoice with her.”

Following his remarks, Chief Sneed and Vice Chief Alan B. Ensley presented members of the Swimmer family with a tribal flag in her honor.

Dr. Debora Foerst, Cherokee High School principal and lifelong friend of Amanda’s, spoke on behalf of her father, Ray Kinsland, and stated, “She loved my parents, visited with them, worshiped with them, sang with them, prayed for them.  She loved singing with them.” 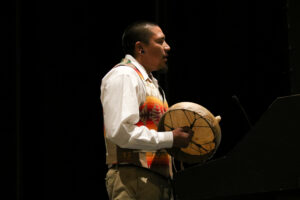 Foerst added, “She called my dad her best friend.  I took my parents to see her a couple of weeks ago, and when we walked in she said, ‘there’s my best friend Ray Kinsland’.  They shared a special friendship, a special bond because like Amanda, he too, is a champion.  My dad has some sayings that we’ve all heard time and again, but I want to leave you with this one, one that Amanda would agree with.  Let us love and serve each other more, and let us love and serve the Lord more.”

Dr. Bill Haggard, UNC – Asheville vice chancellor for student affairs, spoke and said, “In May 2005, UNC Asheville bestowed the honorary Doctorate of Humane Letters to Amanda Swimmer for her talent as an artist and a potter, as a keeper of Cherokee traditions and language, and for being a much-beloved person in her community.  Ms. Swimmer dedicated her life to passing on the gifts of knowledge and creativity to the younger generation throughout western North Carolina.” 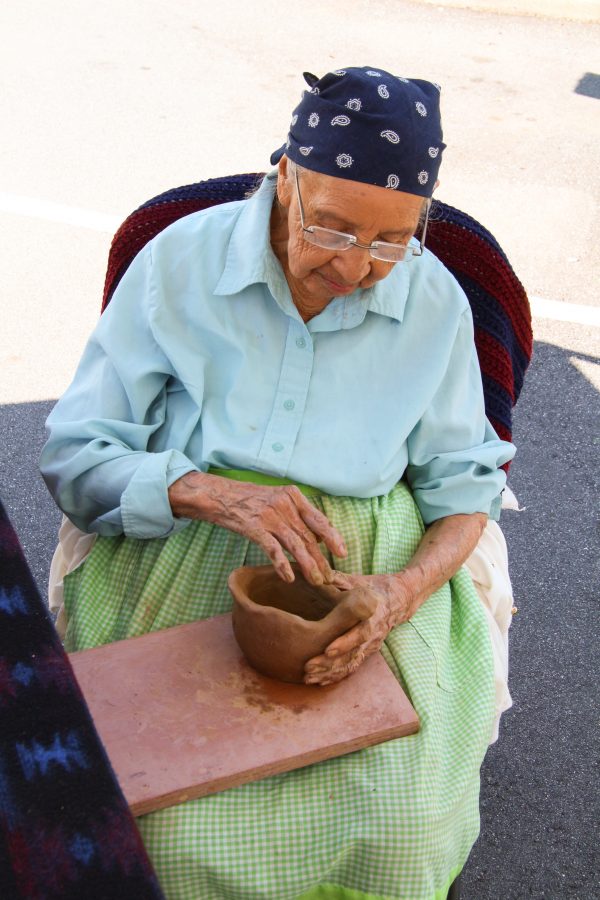 Beloved Woman Amanda Swimmer demonstrates her pottery technique at the Cherokee Voices Festival at the Museum of the Cherokee Indian on June 11, 2016.

Pamela Meister, WCU Mountain Heritage Center director, told of Swimmer winning the Mountain Heritage Award, bestowed by the Center, in 2009 and commented that her pottery legacy will endure.  “I take great joy in knowing that her work will be cherished and preserved, for as close to forever as we possibly can, in the permanent collections of the Mountain Heritage Center, the Museum of the Cherokee Indian, Qualla Arts & Crafts, and in many, many other museums.  And, those objects will be speaking to us for hundreds of years and to many, many future generations.”

Also, during the event, Brennen Foerst, Cherokee High School alumni, sang “How Great Thou Art” with piano accompaniment by Michael Yannette, and the Cherokee Chamber Singers sang “Amazing Grace” in the Cherokee language as well as a Shoshone love song.