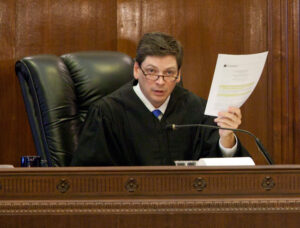 Letts said, “I’m honored the attorney general would recognize my efforts to improve our court system and address community safety.”

Letts is the senior resident Superior Court Judge for Judicial District 30B of the North Carolina Superior Court. He has served on the court since 2009. Judge Letts is leading the planning and implementation of a pilot pretrial release program in Haywood and Jackson counties. The program would reform pretrial release practices to further individual success and public safety.

“It has been a pleasure to partner with Chief Hollingsed on a variety of criminal justice issues,” said Stein. “He is forward-thinking, energetic, and engaged in some of the toughest issues our law enforcement community is facing. Specifically, he is making a real difference in confronting the opioid epidemic and in recruiting the best and brightest to serve as law enforcement officers.”

Chief Hollingsed helped lead the department’s implementation of a law enforcement assisted diversion program in Waynesville, which connects people who are struggling with addiction and convicted of misdemeanors with treatment resources instead of jail time. He was also an advocate for the HOPE (Heroin and Opioid Prevention and Enforcement) Act, which became law earlier this year and provides additional tools to law enforcement officers, so they can confront the opioid epidemic in their communities. Chief Hollingsed serves as Chair of the Criminal Justice Education and Training Standards Commission and in that role, he has supported school safety training for officers and helped launch the Criminal Justice Fellows program, which creates a path for more young people to get a college education and become criminal justice officers in North Carolina.

Other 2018 Dogwood Award recipients are: