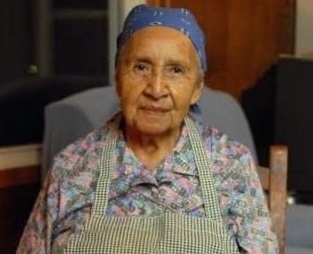 God called in his time and grace on Saturday, Nov. 24 for Amanda Sequoyah Swimmer, 97 years old. Born on Oct. 27, 1921 to Molly Davis Sequoyah and Runningwolfe Sequoyah, she was preceded in death by her husband, Luke Swimmer; one daughter, Mary Ellen Wolfe; and sons, Johnny, Ronald, Herbert, and McKinley Swimmer.

Amanda, a renowned potter, shared her creative abilities which allowed a time-honored tradition to survive. Recognized as an outstanding individual contribution to the preservation of the history and culture of Southern Appalachia, she was awarded the following honors:

But, mostly she’ll be remembered as a homemaker, a grandma to all and as an advocate for the safety of School Children and Community.

Amanda will be taken back to Yellowhill Baptist Church at 5 p.m. Wednesday by Crisp Funeral Home to await the service hour.

Pallbearers will be Amanda’s Grandsons.