The Cherokee Performing Arts Program, formerly the Cherokee Musical Theatre, is presenting a night full of song, dance, acting, and more as “Braves on Broadway” will take the stage next month.  The show is scheduled for Wednesday, Dec. 19 at 7pm at the Chief Joyce Dugan Cultural Arts Center and will cost $5 a person.

Chryssie Whitehead Disbrow, Cherokee Performing Arts Program co-director, said the show is arising from a production and honors theatre classes at Cherokee High School.  “They are going to do a medley of different songs from different musicals.”

Production numbers will be performed from five musicals including: “Les Miserables”, “Hamilton”, “Hairspray”, “Grease”, and “The Producers”.  “Our third block class is for students who really want to have more focus.  So, we have assigned them roles in shows where they are breaking down and learning how to do a role.  We will have eight to 10 solos and definitely five production numbers.  Plus, we’re doing one number from the middle school class’ upcoming production (Feb. 14-15, 2019) of Aladdin Jr.” 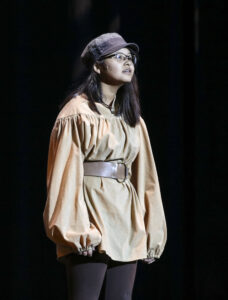 Cece Lambert, in the Cherokee Performing Arts Program at Cherokee Central Schools, is shown performing “Journey to the Past” from “Anastasia” during a Short Attention Span Theatre performance last November. The program is set to present “Braves on Broadway”, a series of musical numbers and productions, on Wednesday, Nov. 19 at 7pm in the Chief Joyce Dugan Cultural Arts Center. (SCOTT MCKIE B.P./One Feather)

Michael Yannette, Cherokee Performing Arts Program co-director, commented, “This time, we’re featuring our seniors a lot and giving them an opportunity to really shine in their last year.  But, in general, this is really similar to what we do with the ‘Short Attention Span Theatre’.  This will be a little more broken down, and we’re going to be able to feature a huge variety.”

Disbrow added, “Movement-wise, they’re learning choreography, and we want them to learn what it’s like to be in a rehearsal with a choreographer, a musical director, and a director staging them in five different ways.  So, it gives them variety and a variety of movement.  And, they’re doing well…it is also teaching them about the stamina that it takes to be able to act, sing, and dance.  So, it’s an educational tool to teach them as well how hard it is.”

This type of practice and training is also to open the student’s eyes as to the reality of the performing arts world and the work it takes.  “They see it and they love it and then they have to really execute it,” said Disbrow.  “They get the notes down beautifully with Yannette, and it sounds incredible.  Then, they come to me and I’m staging them and giving them 60s choreography for ‘Hairspray’ and then we have to work together and integrate it together.”

Disbrow and Yannette stated that the overall goal for the program is to help bring out the best in their students.  “I just want them to do what they’re supposed to do with their lives and embrace their own personal mission in life, whatever that ends up being,” said Yannette.  “I always want them to go out and experience.”

Disbrow said that it’s important to follow your goals.  “You have to know that you went for something and that you tried rather than always wondering what if.  To me, success is trying and really putting yourself out there. That’s success.  Getting the Broadway show is a result, but the journey is the success.  Enjoy the journey.  That is the moment.”

She said her ideal for her students is to find their own path whether that is in the performing arts or elsewhere.  “I just want them to find their light.  It doesn’t matter about them going off and having a career in this.  I want them to be able to speak out and celebrate their voice and be a part of society, whatever that is for them and wherever that is…the sky’s the limit.”