“This isn’t personal against the newspaper staff, but there’s just too much negativity in the newspaper,” Muskogee District (Seat A) Rep. Pete Beaver said at a meeting according to the Journal Record (Oklahoma City).  “There just needs to be more positive coverage.”

“In the past, we have gotten word from officials that they would not touch and influence what we do,” Sterling Cosper, Mvskoke Media manager who resigned shortly after the meeting, said at the meeting as seen in YouTube coverage on Mvskoke Media’s YouTube channel.  “But the thing is, in the public trust, all of us can tell them that all day long, but if the structure and the law does not reflect that, then it’s not going to really inspire confidence.”

He added, “I think if you look out there, there has been a crisis of confidence in this government from time-to-time.  Sometimes, we don’t print the most flattering things, but we’ve always tried to be fair, by our training and NAJA (Native American Journalists Association) and SPJ (Society of Professional Journalist) ethics.”

Cosper said that without professional journalists covering the tribal government, the news coming out dives into rumor and conjecture, many times not attributed to any source.  “I know that we’ve printed stuff that some of you might have found alarming, but at least I can come, like today, and account for what I’ve done.” 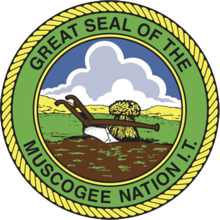 In an interview after the meeting, found on the same YouTube video, Chief Floyd said he doesn’t believe the vote ends free press within the Muscogee (Creek) Nation.  “I think my record stands for itself.  I’ve not interfered or try to steer any story whatsoever…I know it’s been an independent agency, and I’ve treated it just like any other independent.  And, we’ll continue to do that…we will look at the best interest of the citizens and what’s the message that they need to get from Muscogee (Creek) Nation as an official publication and its official media outlet.”

National Council Speaker Lucian Tiger III, who cast the deciding vote on the legislation, wrote in a letter to Mvskoke Media employees on Nov. 9, “NCA 18-180 returns Mvskoke Media to the Executive Branch and will continue to operate as it did before.  Nothing in NCA  18-180 disbands or restricts Mvskoke Media’s ability to act as the Muscogee (Creek) Nation’s media outlet despite attempts to brand the legislation as restrictive or suppressive of freedom of speech.”

The now-defunct Mvskoke Media editorial board issued a statement on Nov. 9, “None of the meeting discussion prior to the vote included any editorial board representatives, even though president Travis Snell and secretary Daniel Carter were both in attendance during the meeting.  During the bill’s discussion, several council representatives cited a desire to see Mvskoke Media producing ‘more positive stories’.  It’s important to remember that ethical journalism serves the best interests of the citizens and not the government.  If the news staff loses the ability to report important information, including stories detailing the conduct of elected officials, then citizens lose their power to hold tribal government official accountable.”

Prior to Thursday’s vote, several media outlets and organizations offered their support in defeating the repeal.  In a joint letter to the Muscogee (Creek) Nation National Council, the officers of the Oklahoma Professional Chapter of the Society of Professional Journalists and FOI (Freedom of Information) Oklahoma, wrote, “The Muscogee (Creek) Nation is one of three tribes in Oklahoma and one of a handful nationally with codified protections for its media outlets.  When the tribes’ Independent Press Act was signed into law just three years ago, the Muscogee (Creek) Nation was hailed for taking such a huge step forward and giving its own people a chance to tell the tribe’s stories…we fully acknowledge that reporters are human and make mistakes occasionally, but those concerns should be addressed in civil conversations rather than through punitive legislation.”

The letter concluded, “The Mvskoke Media staff has received state and national recognition for their fair, unflinching coverage of the good, the bad, and the ugly within their communities.  They must be given every opportunity to continue that work without fear of censorship attempts – or worse – from elected officials.”

Shannon Shaw Duty, Osage News editor, also wrote a letter to the National Council stating, “The Mvskoke Media is an award-winning newspaper that is supported by its reader, the citizens you govern and provide for.  You are showing your citizens that you have nothing to hide when you support an independent press – that you operate with integrity and honesty, not secrets and lies.”

The Native American Journalists Association reacted as well putting out a statement on Nov. 9 stating that the organization “condemns the Muscogee (Creek) Nation’s repeal of the free press law and asks Muscogee (Creek) citizens to support an independent press free of government influence and censorship”.

The statement went on to say, “The text of the measure was not announced or made available to the public – including the Mvskoke Media staff and editorial board – until the morning of the meeting.  As confirmed during Thursday night’s council session, neither the Mvskoke Media staff nor the editorial board were consulted in the drafting process or even knew that the bill had been written.  During debate on the measure, elected officials cited a desire to see ‘more positive stories’ in the newspaper.  NAJA has also learned that Mvskoke Media staff must now receive prior approval on all published material.”

The website for Mvskoke Media (https://mvskokemedia.com) was down on Friday morning and is still down as of press time.  The One Feather sought comment from staff still at Mvskoke Media, but that request was not returned by press time.