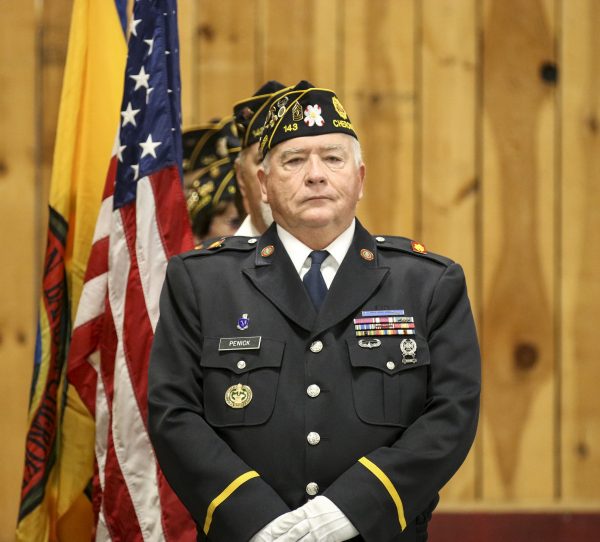 America’s past and present servicemen and servicewomen were honored during a Veteran’s Day Ceremony on Saturday, Nov. 10 at the Cherokee Indian Fairgrounds.  Hosted by the Steve Youngdeer American Legion Post 143, the event was held a day earlier than the usual Veteran’s Day (eleventh hour of the eleventh day of the eleventh month) due to church services on Sunday.

“Veteran’s Day is a special day, a day for reflection and appreciation for the sacrifices that have been made for our freedom,” said Lew Harding, Post 143 Commander, during his welcoming remarks.  “The rows of white headstones in cemeteries around the world stand in silent tribute to these brave men and women.  Sometimes, in the fast-paced lives that we live it’s easy to take for granted the freedoms that we enjoy.  These freedoms were paid for with the lives of men and women that some of us did not know.  By honoring our veterans here today, we say a collective thank you for their service and their sacrifice.  As they have honored us with their service, we can honor them by continuing to uphold the freedoms for which they so valiantly fought.”

He went on to say, “We honor these veterans here today and the fallen heroes of all generations.  This American flag is a national treasure.  It is our symbol of our national unity.  Together with the flags of our native peoples, it represents our priceless heritage of freedom.  We must, all of us, honor it.” 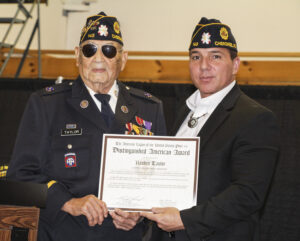 During Saturday’s event, Post 143 gave several awards starting with the Legionnaires of the Year which included: Warren Dupree, David McQueen, Gregory Hunt, and Clyde Harrison.  Special American Legion Distinguished Achievement Awards were presented to Sgt. Randall “Red” Murff and Pfc. Reuben Taylor, both World War II veterans.  Murff served as a bombardier on a B26 in the U.S. Army Air Corps and received two Distinguished Flying Crosses and nine Air Medals.  Taylor, an elder of the Eastern Band of Cherokee Indians who served in the 82nd Airborne Division, participated in the Battle of the Bulge and received the Bronze Star and Purple Heart among other decorations.

Principal Chief Richard G. Sneed, a U.S. Marine Corps veteran, gave the keynote address at Saturday’s event and commented, “Liberty and honor, hope and freedom – these are powerful words that resonate at a visceral level within the heart of every human being.”

He said that life with liberty is all many of us have ever known.  “For the majority of us, liberty is not a luxury that has any price tag attached to it.  We have, for the majority of our lives, enjoyed the rights, the benefits, and the luxuries of liberty with little or no direct cost to ourselves.  And liberty, like every other good thing, if not reflected upon for its value and its fragility will tend to be taken for granted – treated not as a precious gift, purchased at the greatest cost, but instead as a mere entitlement freely provided by some unseen hand.  There are, however, those amongst us who are the keepers of the flame of liberty, those who understand the eternal value of this precious gift that we have been entrusted with.  These are the warriors of our society.”

Chief Sneed said that true warriors do not seek praise for themselves or their actions.  “When honor is bestowed upon them, they humbly reply ‘I was only doing my duty’.”

Dupree and Randell Crowe gave a brief presentation on Cherokee Code Talkers during World War I. 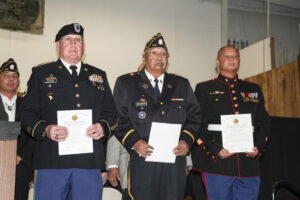 Four members of the Steve Youngdeer American Legion Post 143 were honored as Legionnaires of the Year including, left to right, Warren Dupree, David McQueen, and Gregory Hunt. Not pictured – Clyde Harrison

Dupree read excerpts from a paper written by Captain John Stanley entitled “Personal Experience of a Battalion Commander and Brigade Signal Officer, 105th Field Signal Battalion, in the Somme Offensive, September 29 – October 12, 1918” which outlines how Cherokee soldiers used their language to send messages that were undetected and unbroken by the Germans.

Capt. Stanley wrote that he tried, several times in vain, to explain to his commanders the dangers in using English over the telephone lines which were used as radio technology was not yet in use.  In speaking of a meeting of signal officers, he wrote, “…at this meeting I pointed out to the Division Signal officer that the old 1st N.C. Regiment which was split up at Camp Sevier, SC in 1917 and its personnel assigned to the 119th and 120th Infantry Regiments, contained quite a number of Cherokee Indians which were now somewhere in the division, and that in my opinion, if a number of the most intelligent of them were placed at each telephone, and that they transmit all messages in their native tongue, I felt sure that even a battalion commander could use them in transmitting messages to his company commanders in perfect safety.”

He added, “The matter was taken up with the division commander, and the next day found every command post from brigade forward, including some company command posts, a telephone with a Cherokee Indian beside it.  Needless to say, there were no further messages interrupted by the enemy that we heard of.” 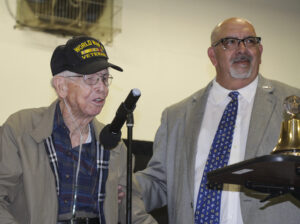 Capt. Stanley went on to write, “From then on until October 12, 1918, at which date I was ordered back to the United States as an instructor, the Cherokees were kept on the job with continued success, and I understand were used until the end of the war.”

Following this historical presentation, Sgt. Gregory Hunt and Chief Sneed presented Vietnam-era Service pins to any veteran who served in that time period who was present and had not previously been honored.