The Steve Youngdeer American Legion Post 143 Color Guard is assigned the prestigious honor of protecting the regimental colors during events, meetings, and funerals for veterans in Cherokee and in western North Carolina.  To date, Post 143 has posted the colors for 98 events this year with 24 of those events being burials of veterans.  Principal Chief Richard G. Sneed presented each Color Guard member with a jacket on Wednesday, Nov. 7 signifying their service in appreciation for their volunteer efforts on behalf of the Cherokee people. 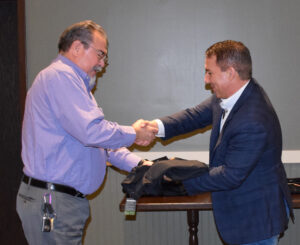 Principal Chief Richard G. Sneed (right), a veteran of the U.S. Marine Corps, presents a Color Guard jacket to Albert Crowe who served in the U.S. Navy from 1982 to 1990. (Photo by Ashleigh Stephens/EBCI Public Relations)

“I offer my sincerest appreciation for all the work these gentlemen do on behalf of the Cherokee people,” said Chief Sneed.  “They volunteer their precious time to ensure the EBCI is represented professionally and honorably.  I would like to extend my thanks to each of these individuals and I hope each of you enjoy the gift presented.”

– Office of the Principal Chief release