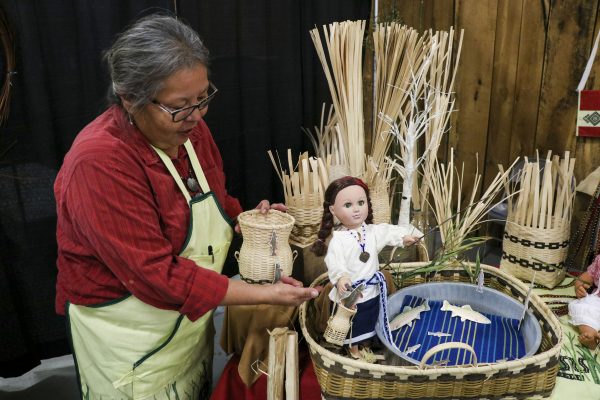 Mary W. Thompson, an EBCI tribal member from the Big Cove Community, shows some of her baskets in her ‘fish-themed display’ at the Kananesgi Basket & Carving Festival held at the Cherokee Indian Fairgrounds on Saturday, Nov. 3. (SCOTT MCKIE B.P./One Feather photos)

The Cherokee Indian Fairgrounds was full of beautiful designs and traditions going back many generations as the Kananesgi Basket & Carving Festival was held on Saturday, Nov. 3.  Artisans from the Eastern Band of Cherokee Indians demonstrated their craft and displayed some wonderful examples of their work.

“My grandma made baskets, my mom made baskets, and my mom raised us by making and selling baskets,” said Mary W. Thompson, an EBCI tribal member from the Big Cove Community. “I seriously sat down and wanted to weave baskets about 15 years ago when there was a revitalization for the double-weave river cane baskets.  Mom, my daughter, and I all learned at the same time to do the double-weave river cane baskets.  I’d always done white oak.  I’ve always been around white oak, but that was our introduction to river cane.”

Thompson added, “I’ve been around it all my  life.”

She said the double-weave river cane basket is her favorite style.  “Once you get it woven, it’s finished.  You don’t have to go back and rim it or anything.  I like white oak too.  It’s easier to work with and get the materials ready.  I like the challenge of river cane.  I’ve been busting cane all week, and I’ve got callouses, cuts, and bruises…I just like it and plus you get so many different patterns out of the cane.  In the river cane baskets, the splints are side-by-side and very close together.”

Thompson said it is important for basket makers to learn to collect and prepare their own materials.  “Mom would tell me that the best white oak you can find is one that grew very slowly probably in a rhododendron thicket on the north side of the mountain.  If it grew in that much underbrush, it would grow really straight and it wasn’t brittle, it was pliable.  But, if you plant it in the middle of a field with that much sunshine, it grows too fast, it grows too brittle, and it’s not even good for handles or anything…I think the kids need to learn to identify their resources and be able to go get them.” 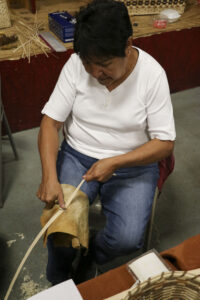 Information provided at the Festival states that white oak baskets have been made since the early 1800s and river cane have been made by Cherokees for many millennia.

“I’m 62-years-old, and all my life I’ve been around basket weaving,” said Betty Maney, an EBCI tribal member from the Big Cove Community.  She said some of the ladies who influenced her in her basket making include: Elsie Watty, Agnes Welch, her grandmother Annie Powell Welch, and her mother Geraldine Walkingstick.  “I grew up, as a child, going with mom when she’d grab an axe to go out on the hillside and chop down a white oak tree and watch her work it up.”

After moving home again to Cherokee with a family of her own, Maney decided she wanted to learn the art herself with her mother providing her with instruction, to a point.  “One day, I decided that I wanted to do it, and she let me have some materials.  She never once sat me down and said ‘this is how you do it’. When I got ready, I just picked it up and started making it because I already knew how from a lifetime of watching her weave baskets.”

Saturday’s event was organized by EBCI tribal members Tonya Carroll, Tara McCoy, and Hope Huskey with grant funding from the Cherokee Preservation Foundation.  “Ultimately, one of our goals is to get the artists together so they’re able to talk and collaborate,” said Carroll.  “Last night, they came to set up their tables and we had dinner for them so they were able to sit and talk amongst each other to share ideas.” 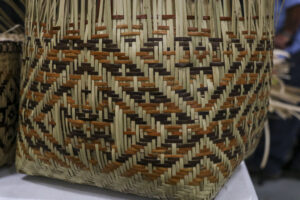 This photo shows the detail of a river cane basket by Gabe Crow.

McCoy was one of several carvers at the event, and she was demonstrating shell carving in which she carves the design into the shell, paints the design, and then removes the excess to leave a dynamic effect.  Also representing the carving end was award-winning artist Butch Goings, who, along with his wife Louise, a noted basket maker, received the 2016 Jennifer Easton Community Spirit Award from the First Peoples Fund for their “exceptional passion, wisdom and dedication to passing on ancestral knowledge in their communities”.  During Saturday’s event, Louise was busy making white oak splints and Butch was working on an animal figure carving.

Reed uses white oak and maple in her baskets.

When asked what her favorite thing about making baskets is, Reed thought for a second and replied, “It’s just what I do.”  She laughed and said, “I’ve been saying I’m going to quit, but I haven’t quit yet.”