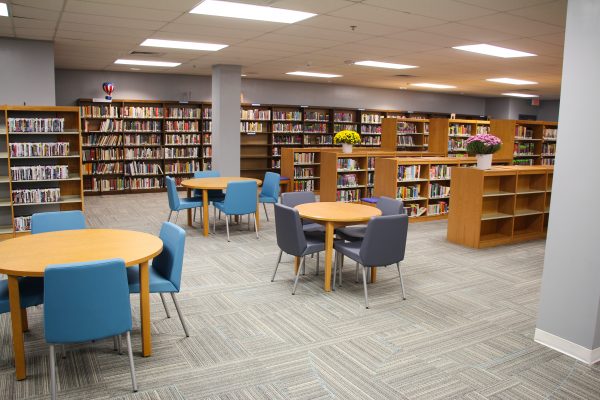 The Qualla Boundary Public Library officially re-opened with a new look on the afternoon of Friday, Nov. 2. The facility received new paint and carpet throughout as well as several layout changes to improve the flow throughout. (SCOTT MCKIE B.P./One Feather photos)

The Qualla Boundary Public Library officially re-opened with a new look on the afternoon of Friday, Nov. 2.  The facility received new paint and carpet throughout as well as several layout changes to improve the flow throughout.

“I think the project turned out really well,” said Adam Kyle Lambert, Qualla Boundary Public Library manager.  “Our intentions were to open up the space and make it more inviting so that we can better our relationship with the public and have better patronage and participation in the library.” 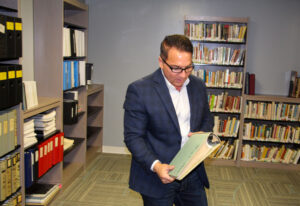 Chief Sneed looks at a 1965 historical record of the Big Y Community in the research room.

EBCI Facilities Management did the painting on the project with a total paint cost of $700.  New furniture and shelves were purchased for $112,000 as a capital improvement fund project.  Library staff repurposed a little more than half of the furniture that was in the facility already, and some of the shelves were donations from the old Cherokee High School.

“This is the first real renovation of the Library since moving in to Ginger Lynn Welch Complex around 15 years ago,” Principal Chief Richard G. Sneed said during Friday’s event.  “Adam (Lambert), you have just done a fantastic job.  You came in and grabbed the bull by the horns.”

Renissa McLaughlin, EBCI Education and Training youth and adult education director, noted that program staff looked for ways to cut costs on the project.  “Although it looks like we spent a lot of money, we were able to keep the costs down considerably.  We kept all of the hearty maple furniture and reupholstered as much as we could.  It looks new, but we saved the Tribe a lot of money.” 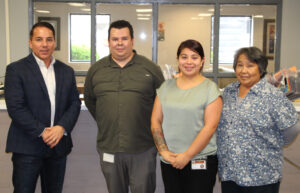 The Library has money from several grants coming that will further enhance the program.  An $8,000 grant from the Cherokee Preservation Foundation will help build a searchable database as well as help with digitizing older records and publications, including old copies of the One Feather, to aid people in doing historical and genealogical research.  A grant from the Institute of Museum and Library Sciences Native American Library Services, also for $8,000, will be used to improve the children’s area.

“We are encouraging reading, not just playing,” said Lambert who hopes the children’s area will be utilized more.