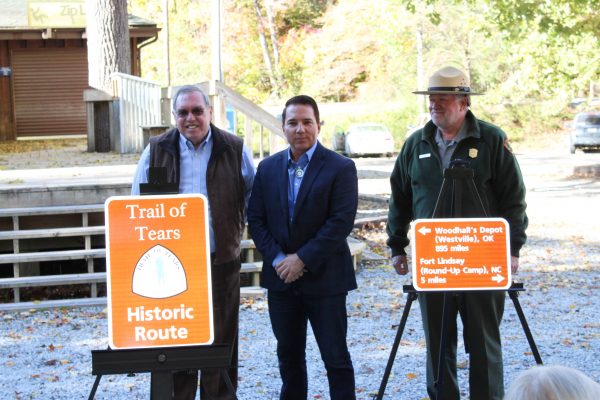 WESSER – With the 50th anniversary of the National Trails System, a commemoration with the Removal 180 years ago was unveiled at the Nantahala Outdoor Center (NOC) Monday, Oct. 29. Principal Chief Richard G. Sneed was on hand to address the event, and so was Susan Abram, president of the North Carolina Trail of Tears Association along with Jack Baker, president of the National Trail of Tears Association.

Abram said, “It is one of two historic trails that’s actually devoted in the United States to Native American history, so we feel very honored to be a part of that.” She said the forced removal is something that should never be forgotten. “There were about 3,000 Cherokees that were removed from this area, but we are lucky that we have a population that remains here.”

The more than 5,000-mile Trail of Tears National Historic Trail, winding through nine states, was designated by congress in 1987 for protection and interpretation through the National Park Service. The 2,000-mile Appalachian Trail was designated as the first national scenic trail after the passage of the National Trails System Act in 1968. It passes through 14 states, including North Carolina.

“I want you to think too about where we are today as a nation,” said Chief Sneed. “Our story is, as I always say, is a cautionary tale. It’s a cautionary tale of when laws and treaties and agreements just become words on paper.”

He said when people who are tasked with enforcing those agreements don’t have the integrity to carry them out, events like the Trail of Tears become possible. “Our story is a reminder that all of us are human beings.” He said the story is one of resilience. “Ours is one of a people who refused to be destroyed.”

Brett Riggs, Sequoyah distinguished professor of studies at Western Carolina University and at-large member of the Trail of Tears Association, spoke of the significance of the area surrounding the NOC. “One hundred eighty years ago, this was a Cherokee town place.”

He said soldiers came to the area to remove town people. “Some of the families refused to leave.”

Families would hide in laurel thickets when troops came to round them up. He said the removal finally ended with the execution of Tsali and his family who were involved in the killing of two soldiers to escape. “We’re here today to remember these people in their struggles and ultimately their victories in this place 180 years ago.”

National Park Service Trail of Tears Superintendent Aaron Mahr traveled from Santa Fe, N.M., “It’s certainly worth the effort just to stand by the river. It’s really something special.” He said it’s also special to have people develop awareness through the historic trail’s existence. “We’re dedicating a new sign and a new development on the Trail of Tears. And what makes that particularly special is we’re finding a place where it intersects with the Appalachian Trail.”