ON THE SIDELINES: A track star with a big heart

While on the sidelines at various events, I’ve had the opportunity to meet some cool athletes (high school, college, and professional), but it’s not everyday that you get to meet an Olympic medalist.  That’s exactly what happened on the night of Friday, Oct. 26 as Manteo Mitchell, 2012 Olympic silver medalist, visited Cherokee and watched the Braves take on Hayesville and kept a promise he made to some student-athletes.

Through his coach at Western Carolina University, Danny Williamson, who formerly coached cross country and track and field at Cherokee, Mitchell has visited with Cherokee students and has developed a working relationship with the CHS athletic department. 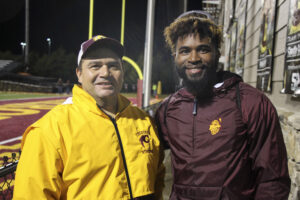 Mitchell, originally from Shelby and currently residing in Asheville, is a 400M specialist and is currently training for the World Championships in Doha, Quatar in 2019 and the 2020 Tokyo Olympics.  “I’ve always had a connection with the youth in some capacity – whether it be in the classroom, outside the classroom, or on the field of play, I’ve just always had a connection.”

He gained notoriety and etched his way into sports legends during the 2012 Olympics with one of the most incredible stories of courage in sports history.  According to information from the U.S. Track and Field Team, “Manteo Mitchell quickly became a story at the 2012 London Olympic Games.  Running for Team USA in the prelims of the 4x400M relay, Mitchell suffered a broken leg.  When most would have quit, Mitchell finished his leg of the relay and helped Team USA to the fastest time ever run in the prelims in the event at the Olympic Games.  They would go on to win the silver medal.  After the Games, when he traveled to the White House, President Obama told Mitchell it was one of his favorite stories from the Games.”

Mitchell said he feels the need to give back and help to inspire the youth.  “Growing up in a drug-infested neighborhood, 300 people population, I wasn’t even supposed to make it out of my doorstep.  I want to be able to be a living testimony to hard work, dedication, and motivation…it’s important to show, not just the people here in Cherokee, but people all over the world, that that’s something anybody can do if they really apply themselves and really believe in what it is they want to achieve.”

Mitchell has been involved with the Cherokee students for several years now.  “I connect well with these athletes and these kids here.  I came and spoke to them about two years ago, and we just clicked.  Now, they hit me up on all sorts of social media.”

Several of those students invited him to attend the Cherokee Braves vs Hayesville Yellow Jackets game on Friday as it was Senior Night.  “They said, ‘can you please come, we’d love to have you’, and I said, ‘I’ll be there’.  There’s not a lot of people who keep their word for kids.  Not a lot of people who are considered idols or inspirational figures keep their word.  I’m one of those people who if I say I’m going to do something, I’m going to do it…because I didn’t have that growing up.”

Peanut Crowe, Cherokee Central Schools athletic director, said they have extended the welcome mat for Mitchell, “Manteo came over one day and he just clicked with the kids.  He’s come over and trained with them, and he’s just been great for our program up here.  He’s just a good guy and we back him 110 percent.”

Mitchell is an incredible athlete, no doubt about that, but his sense of humanity and feelings of responsibility towards the youth of today is what makes him great.  Good luck in your training sir.  You’ll have a large cheering crowd from Cherokee for sure.