CULLOWHEE – November is Native American Heritage Month, and a series of events and activities is planned by Western Carolina University’s Cherokee Center in celebration of the designation. 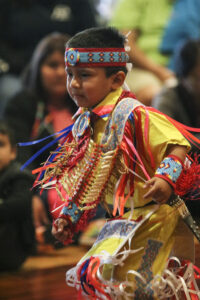 Uwelug Swimmer, A student from the New Kituwah Academy, performs the grass dance during a Youth Powwow held at WCU last spring. Traditional Native American dance and other forms of native culture will return to the campus in a series of November events commemorating Native American Heritage Month. (SCOTT MCKIE B.P./One Feather)

“We intend to highlight indigenous cultures that are represented at WCU,” said Sky Sampson, director of the center and an enrolled member of the Eastern Band of Cherokee Indians. “We also want to honor the rich indigenous history that is shared by the Eastern Band and recognize our campus as the sacred homelands of the Cherokee people. Throughout the month, we will explore native traditions, not as a history lesson or museum curation, but as a current, contemporary part of the campus and community.”

The commemorative month is intended to provide a platform for native peoples to share traditional culture, music, crafts, dance and concepts of life. Nationally throughout November, the Library of Congress, National Archives and Records Administration, National Endowment for the Humanities, National Gallery of Art, National Park Service, Smithsonian Institution and U.S. Holocaust Memorial Museum will join together in paying tribute to the ancestry and traditions of Native Americans.

The Cherokee Center, located at 1594 Acquoni Road, Cherokee, was established in 1975 as an office for outreach and partnership development. The center provides a broad range of assistance for Eastern Band of Cherokee Indians interested in attending WCU, which includes application processes, campus tours, educational workshops, alumni engagement and cultural awareness both on campus and off. The center is the headquarters for all communication between WCU and the Eastern Band.

“We hope to have widespread involvement,” Sampson said. “We want everyone to share in experiences, ask questions and learn, and enjoy.”