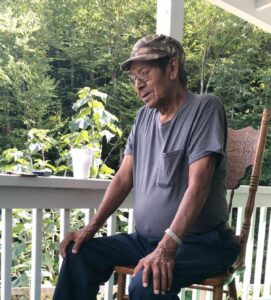 Garfield was a kind, considerate man. He never met a stranger and was faithful to share his love for the Lord with others. He had friends everywhere and is known both locally and away from here as a Cherokee craftsmen. He is well known locally by most stickball players and has supplied ball sticks, especially at fair time, for many years.  A wood carver and dough bowl maker, his talent was endless.

Garfield loved most of all to play and sing gospel music. He started singing with his mom and dad at an early age. Garfield has tried to pass along his love for the Lord by example to many people, especially children. He has also taught them to carve and carry on Cherokee traditions. A first language speaker, he always shared the Cherokee language and taught others as he could. Garfield went out of his way to help others, never asking for anything in return. He will be missed by many.  He worked in maintenance at the Cherokee Museum for 14 years until he retired and was a member of the Bethabara Baptist Church.

A visitation will be held at Bethabara Baptist Church on Friday, Oct. 26 from 6pm 12midnight and the funeral service will be held at the church as well on Saturday, Oct. 27 at 2pm. Bro. Ernie Stiles and Pastor Eddie Sherrill will officiate. Burial will follow at the Long Family Cemetery on Long Branch Rd.  The pallbearers will be as follows, Cody Long, Delbert Ross, Eugene long, Deino Panther, Walker Welch, Tylor Keffer, and Farrell Oocumma.