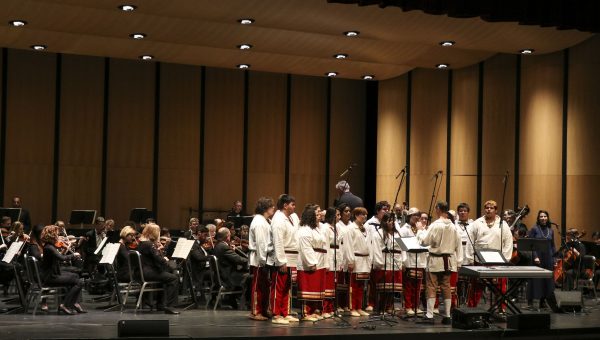 These words, part of a song entitled “Phoenix Rising”, and the sounds of violin, cello, flute, oboe, and others of the North Carolina Symphony blended with the vocal stylings of the Cherokee Chamber Singers in a remarkable collaboration entitled “Si Otsedoha: We’re Still Here”.  The two groups came together for a performance in the Chief Joyce Dugan Cultural Arts Center on the evening of Thursday, Oct. 18 which was part of a mini-tour for a week which began in Raleigh earlier in the week.

Principal Chief Richard G. Sneed welcomed the Symphony and spectators to the event on Thursday and commented, “The concept for the piece is that it would integrate Cherokee musical traditions into the orchestral music, and the concept evolved over time.  Mr. (William) Brittelle made many visits to Cherokee, sometimes weeks on end, meeting with elders and leaders of the community and working with the students of the Cherokee Chamber Singers.  He decided that he wanted the direction of his musical work to come directly from the students themselves.
He went on to say, “The Cherokee Chamber Singers showed remarkable leadership in organizing a forum for their fellow students to share their thoughts on self-identity, about what it means to them to be Cherokee and what they want others to know about this community.  The statements that were collected from students at Cherokee Central Schools became the text that you will hear sung here tonight.  Every word was written by Cherokee students.” 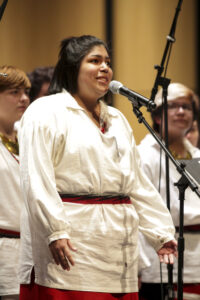 The members of the Chamber Singers performing include:

Michael Yannette, Cherokee Chamber Singers director, said the collaboration has been an outstanding experience for the students.  “The week was absolutely incredible on so many levels!  On the educational level, the kids just gained so much in their performance ability, having worked with Grant Llewellyn, the conductor from the North Carolina Symphony and just having to really put it out there!”

He said earlier in the week he asked the students what they have gained from the experience.  “The very first thing that was mentioned was pride.  It’s a remarkable work of art that this man created, and, of course, the kids contribution to that through these statements and the lyrics that were chosen is very powerful.  They have learned about their own history in such a profound way, and the music has connected them to their own sense of their ancestry.  It would be hard to listen to this piece and not feel that somehow ancestral voices are speaking through Bill Brittelle, the composer.”

In a message from the composer, Brittelle applauded the students’ contribution to the project.  “These are remarkable young adults with over 10,000 years of history behind them and an incredibly beautiful, complex, and resilient culture.  They’re also youth of the modern age, with a truly unique perspective and a deep insight into what’s happening in the world today,  This is their platform to tell their story – and the story they’ve chosen to tell is not one of victimhood or persecution, but of the transcendent strength of the Cherokee spirit.”

That voice, that spirit was put forward in each piece such as the spoken word “When Money Becomes Religion”, a poem written by Kyra Sneed and spoken by Ella Montelongo, which states, “When money become religion, the Constitution disappears.  Truth runs and hides and all that’s left is a signed piece of paper saying we were never here in the first place.” 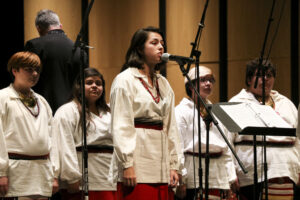 In the title piece, “Si Otsedoha”, the students alternated between spoken word and vocals saying, “Si Otsedoha, nigohilv otsedohesdi, sgiyatvgodi” which translates from Cherokee into English as “We’re still here, and always will be.  You must hear us.”

Some of the students provided statements on their experience and the message they’re trying to get across.

Sneed noted “I want to share the story of the people of this community and spread awareness – to right some wrongs.”

Montelongo said, “I want people to not have sympathy, but empathy – to relate to our story in some way.”

Lequire commented, “Our culture is not dying out.  We still have it, and it’s still going strong.  Our words deserve to be heard.”

Yannette said this has been one of the greatest experiences he’s had in his over 30 years of teaching and has given the students more confidence in their performing abilities.  “Having to sing in front of 1,600 people numerous times has made them gain so much confidence in their abilities.  The audiences just exploded!  At the premiere, the audience was already standing by the time I turned around.”

He said the support for the Chamber Singers has been incredible and told of an emotional moment at the premiere.  “There was a Cherokee couple who extended the EBCI flag from the third balcony.  We were all just broken up with joy!  It was a phenomenal moment for them after all the hard work, emotional investment, and commitment to the performance of it!”