Mariah Bahe, a member of the Navajo Nation with Eastern Band Cherokee heritage, has qualified for the USA Boxing Elite & Youth National Championships at Salt Lake City, Utah on Dec. 2-8.  With a win over Romina Ceniceros-Rojas, of Dallas, Texas, Bahe won the Intermediate Girls 90lbs division at the 2018 USA Boxing Eastern Elite Qualifier and Regional Open Championship earlier this month in Chattanooga, Tenn. and qualified for the National Championships. 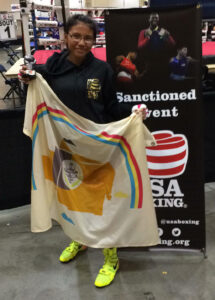 Holding a Navajo Nation flag, Mariah Bahe, a member of the Navajo Nation with Eastern Band Cherokee heritage, from Chinle, Ariz., defeated Romina Ceniceros-Rojas, of Dallas, Texas, to win the Intermediate Girls 90lbs division at the 2018 USA Boxing Eastern Elite Qualifier and Regional Open Championship on Wednesday, Oct. 10 in Chattanooga, Tenn. With the win, she has qualified for the USA Boxing Elite & Youth National Championships in Salt Lake City in December. (Photo courtesy of Bahe family)

A win at nationals and she is on the USA Boxing Jr. Olympics team which would give her a chance to travel internationally for competitions as well as train at the U.S. Olympic Training Center in Colorado Springs, Colo.

“I was so happy and proud that I won after all the time and hard work I put in for three months and two-a-day practices right after each other – cross country and then boxing,” said Bahe, who resides in Chinle, Ariz. on the Navajo Nation.  “It would mean a lot to me because I would be the first out of the Navajo Nation and my team to be on the Jr. Olympic team.”

Bahe, now 14 and a freshman in high school, has been in the sport of boxing since she was 5-years-old.  She started out watching her brothers and sisters in the Damon-Bahe Boxing Gym in Chinle, and she started competing at age 8.

Elvina Bahe, Mariah’s mother, said the family is very happy and proud of her recent win at the regional competition.  “She has worked so hard training for this.  No one in the boxing gym can keep up with her.  She amazes me every day.  Her drive to be the best and stay at the number one spot is none that I have ever seen.”

She spoke of Mariah’s sacrifices for the sport.  “She knows that there are things in her life that she will give up to train like hanging out with friends, eating out, special family time.  She has missed her brother’s graduation and her brother’s football games to compete out of state.  I believe some day she will be on the Olympic team.  She has her mind set and she knows what she wants out of life.”

Mariah Bahe seems to agree.  “My goal is to compete at the 2024 Paris Olympics – to show every girl out there that anything is possible.”