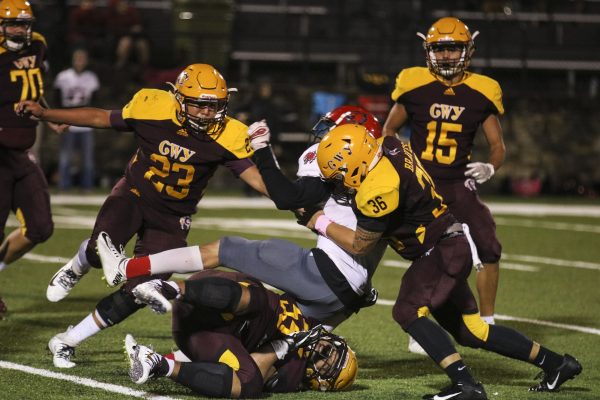 Cherokee’s defense held Andrews to 128 total yards and shut them out in a game on the chilly, fall evening of Friday, Oct. 12 at Ray Kinsland Stadium.  The Braves (5-3) scored two touchdowns in the fourth quarter to lift them over the Wildcats (2-7) by a score of 21-0.  The game was carried live on My40, and the Braves hoisted the Friday Night Rivals trophy at the end.

“I thought, defensively, we played well from the start to the finish and got some big stops when we needed to,” said Kent Briggs, Braves head coach.  “They did some nice things on their defense and kept us a little off-balance on offense.  We were close at times, but we just couldn’t get it into the end zone like we usually do.  We’ve got to do a better job next week against Robbinsville.”

He added, “At the same time, we had that long drive when we needed to, and we stood up at the right time.” 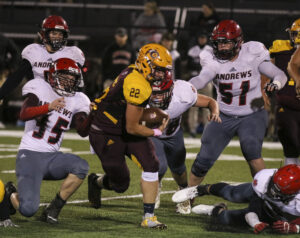 TOUGH: Cherokee’s Terence Ledford (#22) runs hard through the Andrews defense. On the night, he had 22 carries for 89 yards and 1 touchdown.

Coach Briggs said the Braves defense was tuned into what the Wildcats were doing in the game.  “We worked hard all week, and we just did a good job of stopping what they were trying to do.”

Andrews had more offensive plays (57 to 49) than Cherokee, but the Braves had 240 total yards, almost double the Wildcats’ output on the night.  Bobby Crowe, Braves junior quarterback, completed 7 of 13 passes for 111 yards.  His favorite target on the night was Mintz with 5 receptions for 92 yards.  Terence Ledford, senior running back, carried the ball 22 times for 89 yards and 1 touchdown.

The first half was a series of defensive stops and punts by both teams.  Cherokee got on the board just before the half as Mintz took a wildcat formation snap and ran in from 3 yards out for the first score of the game.  Rocky Peebles, Braves sophomore kicker, kicked the extra point to give Cherokee a 7-0 lead at the half. 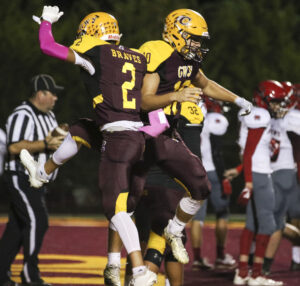 CELEBRATE: Cherokee’s Michael Bernhisel (#2) and Cade Mintz (#10) celebrate after a 3-yard touchdown run by Mintz just before the half. Both had interceptions on defense and Mintz caught 5 passes for 92 yards.

Following a fumble on a punt return late in the third quarter, Andrews set up shop in the red zone at the Cherokee 10-yard line.  The Braves defense held tightly though and stopped the Wildcats on a 4th and 1 from the 1-yard line.

Taking over on their own 1, Cherokee started a 15-play, 99-yard drive that would eat up 6:12 off the clock.  That drive culminated with a 1-yard touchdown run by Ledford.  Peebles, perfect on the night, added the point-after kick and Cherokee led 14-0 with 6:44 left in the game.

The Braves would get into the end zone once more as Mintz intercepted a pass and returned it 65 yards to the house.  Peebles added the point-after, and Cherokee led 21-0 which is how the game would end.

Cherokee travels to Robbinsville on Friday, Oct. 19.  When asked what the keys to that game will be, Coach Briggs noted, “We’ve got to do a better job on offense and taking advantage of opportunities when we get into the red zone.  When we get those opportunities, we can’t let them go by.  We’ve struggled a little bit with that this year.  Our defense is going to have to play great next week.” 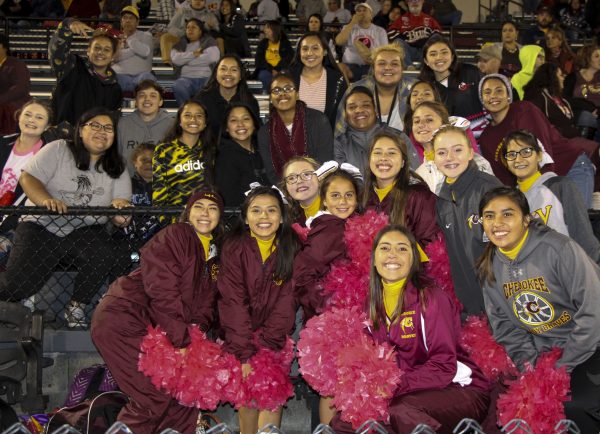 CHEERY: Cherokee’s student section and cheerleaders were not phased by the chilly weather during Friday’s game. The varsity cheerleaders used pink pom-poms in recognition of Breast Cancer Awareness Month.