ON THE SIDELINES: Fan behavior depends on the sport

Next week, Cherokee High School will host the Smoky Mountain Conference cross country championship and I’m very much looking forward to seeing the fans – oh, and the runners too.

I find fans attending cross country and track and field events very interesting.  They are supportive, sometimes way too supportive in my humble opinion.

While on the sidelines of football or basketball games, I’ve heard some terrible things screamed at the young players.  At the very least, every game someone yells something such as “catch the (expletive deleted) ball” or “come on, make your layups”.

I’ve never heard any such thing at a cross country or track and field meet.  Ever.

I do hear things such as “come on (insert runner’s name here), you’re doing great”, “run your race”, or “you can catch him, you’re awesome”.  Many times, to me, those come off as fake.  As a former runner, who sometimes had a great race and other times performed awfully, I wouldn’t have liked being told I was doing great if I was in the bottom 20 percent on a day. 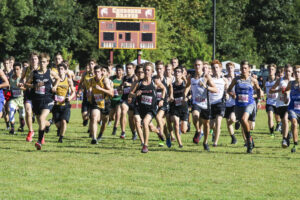 CHAMPIONSHIP: No matter how you cheer on cross country runners, come out for a great meet as Cherokee High School hosts the Smoky Mountain Conference cross country championship on the afternoon of Wednesday, Oct. 17. (SCOTT MCKIE B.P./One Feather)

I am puzzled.  What is the difference?

I know football is king in the south and basketball is king on every Indian reservation so I get that the level of fervor over both is much higher than it is for cross country.  You just have to look at Ray Kinsland Stadium on a Friday night or the Charles George Memorial Arena on game nights to see that there is a ton more interest in those sports than the running sports.

But, that still doesn’t explain the individual fans.

But, there has to be some sort of middle ground.

It’s a wild ride to go from football coverage to cross country coverage.  I highly recommend it to anyone interested in the human psyche. The website runwashington.com gives advice to parents and fans new to the sport in an article entitled “When parents are the cross country rookies”.  In it, reporter Mollie Zapata writes, “As a supporter, you are there to tell them they feel great and will be awesome.  If anything, remind them before the race to trust in their training and to have fun.  Afterwards, if they had a good race, celebrate with them!  And if they had a rough day, celebrate with them!  As long as they tried their best, it counts as a win.”

That sounds like great advice.  I just don’t see it happening in sports like football and basketball no matter the level – high school, college, or pro.  Can you imagine the reporters in the post-game interview asking Aaron Rodgers if he had a good time after Sunday’s loss to the Lions?

I’ll end this with a quote from the GOAT, the real GOAT, his airness Michael Jordan, who once said, “Just play.  Have fun.  Enjoy the game.”

We should all listen to him.  And, as an aside, come out and cheer on (in whichever fashion you wish), your favorite runner at the SMC meet on Wednesday.  Eddie Swimmer, Cherokee Central Schools cross country head coach, and staff put on a fabulous event each time.  Go Braves and Lady Braves!