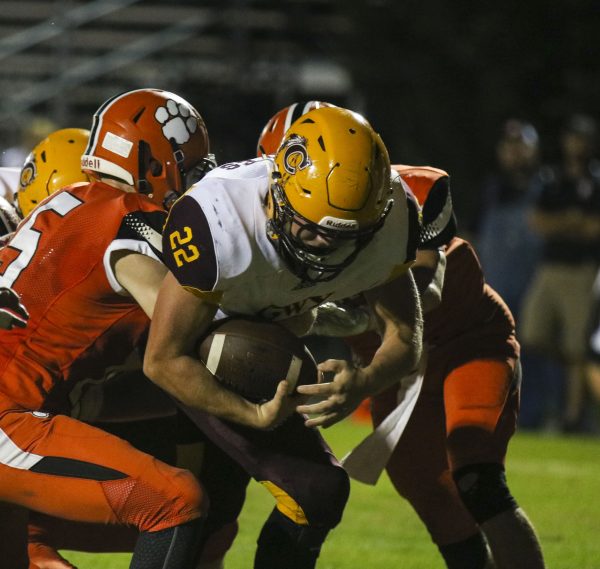 TOUGH: Cherokee’s Terence Ledford (#22) breaks through two Rosman tacklers en route to a touchdown in the second half of a game at Rosman on Friday, Oct. 5. On the night, he rushed 11 times for 58 yards and a touchdown. (SCOTT MCKIE B.P./One Feather photos)

ROSMAN – With the annual Cherokee Indian Fair in full swing at home, the Cherokee Braves (4-3) traveled to the Rosman Tigers (2-6) on the evening of Friday, Oct. 5.  After trailing 9-7 at the half, Cherokee came out and put on an offensive show in the second half while playing stifling defense to take a 34-17 win.

“I’ve got to give Rosman some credit,” said Kent Briggs, Braves head coach. “They played a great game in the first half, and they’ve got a lot of weapons.  We had to go out there and play well to be in the game in the first half.  We didn’t do everything right, but we played hard.  It was a tight game, but the difference was we came out in the second half and played like we can play.  We played to win instead of not to lose.”

That mentality is resonating through the team.  “I think that has been what has sort of cost of us sometimes this season.  We had three losses, but I feel that the losses were because we were worrying more about losing than going out there and winning it.  Tonight, in the second half, we had to decide, ‘are we going to do that or are we going to go out and win?’, and I think our guys went out there and did it.”

Coach Briggs said that some of the second string players are making key contributions to the team.  “We’ve had to have some guys step up.  We’ve had some key injuries.  Everybody’s having to play roles that they haven’t played before, and I was really proud of our guys the way they came out and played those roles and helped this team win a game.”

Terence Ledford, Braves senior running back, rushed 11 times for 58 yards and a touchdown. 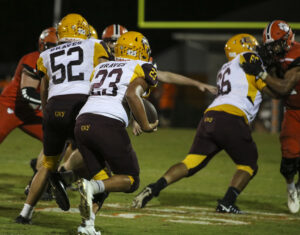 PICK: Cherokee’s Kyler Hill (#23), senior, takes the ball up field after an interception. He also had 11 tackles in the game.

The Braves defense held tight all game long allowing only one touchdown per half for the Tigers.  Cherokee was led by Ledford with 12 tackles followed by Kyler Hill 11, Isaiah Armachain 10, Joaquin Layno 10, Masih Catolster 9, and Mintz 6. Hill also had an interception on the night.

The Braves got on the board first as Isaiah Evans, senior running back, ran for a 1-yard run at the 2:53 mark of the first.  Rocky Peebles, Braves senior kicker, hit the point-after and Cherokee led 7-0.

Rosman’s Marcus Stamey hit a 25-yard field goal midway through the second, and they followed that up three minutes later as Hooper Thomas caught a 4-yard touchdown pass from Luke Stewart.  The two-point failed and Rosman led 9-7 at the half.

Crowe came into the game in the third and threw a 77-yard touchdown to Mintz on his first pass of the game.  Peebles added the extra point, and Cherokee re-took the lead 14-9 and would not relinquish it.

With two minutes left in the quarter, Ledford ran 4 yards for a score. The point-after failed, and Cherokee led 20-9.

Early in the fourth, Crowe punched it into the end zone on a 1-yard dive.  Peebles added the extra point, and Cherokee led 27-9 with just over nine minutes left in the game.

Four minutes later, Crowe connected with Bernhisel on a 20-yard touchdown pass to seal the game for the Braves.  Peebles added the point-after kick and Cherokee led 34-9.

The Tigers would add one more score late as Stewart hit Samuel Chappell on a 27-yard touchdown pass.  The two-point conversion was good and Cherokee led 34-17 which is how the game would end.