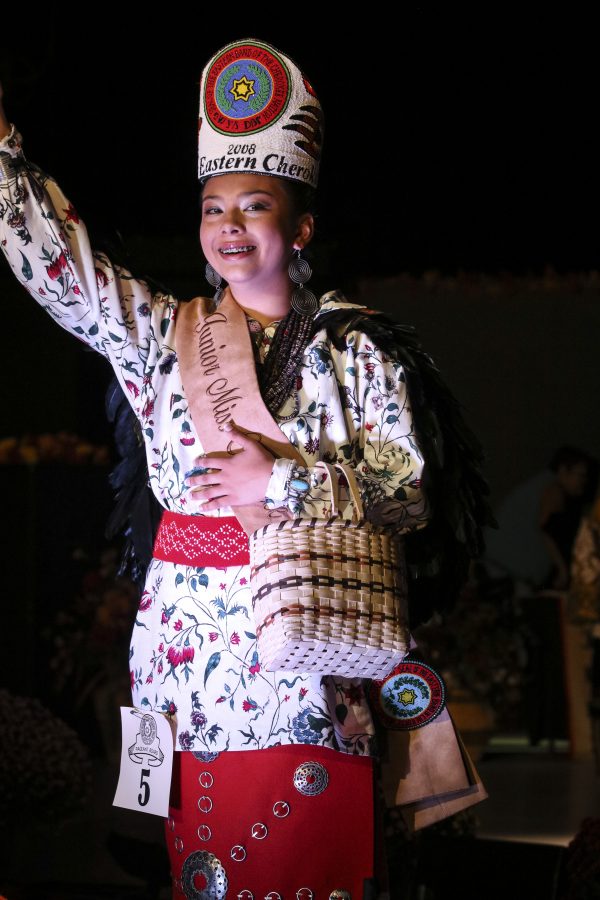 JUNIOR MISS: Destiny Siweumptewa, a member of the Long Hair Clan from the Birdtown Community, was named 2018-19 Junior Miss Cherokee during a pageant held at the Cherokee Indian Fairgrounds on the evening of Thursday, Oct. 4. (SCOTT MCKIE B.P./One Feather photos)

Siweumptewa was named Miss Congeniality and Janna Girty, a member of the Wolf Clan from the Birdtown Community, was named Most Photogenic.

The young ladies introduced themselves wearing outfits of their choice, each describing why they chose their particular dress.

Cruz wore a 16th century style Cherokee outfit consisting of a twined skirt and drop-shoulder feather cape.  “Throughout the years, our people have changed, evolved, and modernized, but one thing that hasn’t changed and that’s the Kituwah blood running through our veins.  We are here on our homeland with our culture waiting to be carried on.  Through oppression and colonization, our culture had disappeared.  If we continue to stand together, we can revitalize all that was lost.” 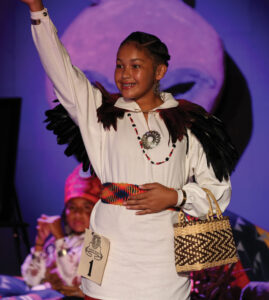 TRADITIONAL: Jenna Cruz, a member of the Long Hair Clan from the Birdtown Community, models her traditional Cherokee outfit. She was named second runner-up in the pageant.

Girty, wearing a jacket emblazoned with syllabary characters, said she wore it to honor those, including herself, who have gone through speech therapy.  She noted that the letter ‘r’ gave her difficulties.  “I was so embarrassed.  I didn’t want to read out loud or talk in front of a class or pronounce my last name.  After I spent two years working with my speech pathologist Allie, I strengthened and retrained my tongue.”

Rayven Hughes, a member of the Wild Potato Clan from the Birdtown Community, wore a doctor’s coat.  “I aspire to become a medical doctor to help our people.”

Panther wore a brightly colored outfit covered with words.  “My outfit of choice reflects the strong characteristics that make me the young lady that I am today.  The words on my outfit reflect who I am and are what makes me what I am now.  I am bold and strong.  I am a daughter and a sister.  I am blessed and unique.  I am funny and smart.  I am cute and stubborn.  I am sporty and artsy.  All these words make up who I am and so much more.”

Siweumptewa wore a red jingle dress and commented, “It represents three important things to me – my Cherokee and Hopi native culture, my family, and my love of art.  In both native cultures, red stands for fire and my red dress represents the fire that burns inside of me for success.  All of the other colors hold special meanings to both tribes.  It took approximately 25 hours to complete my dress.  One of my greatest memories is sitting at my great-grandmother’s feet placing ribbon on all 200 jingles.  Every time I move or dance in my jingle dress, it takes me back to that day.” 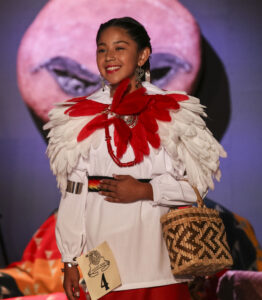 SMILES: Nevayah Panther, a member of the Bird Clan from the Birdtown and Big Cove Communities, is all smiles as she models her traditional Cherokee outfit. She was named first runner-up in the pageant.

Like the other junior pageants, Siweumptewa was crowned with a former Miss Cherokee’s crown – that of Miss Cherokee 2008 Amanda Wolfe Moore.