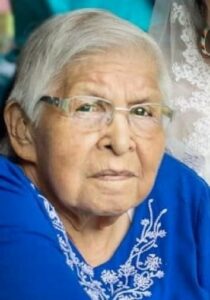 She was the daughter of the late Ben and Kina Powell.  In addition to her parents, she was preceded in death by her husband of 64 years, Isaac D. Swimmer; one son, David P. Swimmer; one grandson, Tsa-ni A. Youngdeer; and a great grandson, Cayden T. Lossie.

Boots was lovingly known to a couple of her grandsons as “Granny Grump” and to many simply as “Mom”.  Boots was a home maker.  She worked as a guide at the Indian Village for a number of years.  She was an avid bead worker, and a master maker of pickled beans, krout, and anything that could be pickled, canned, or frozen.