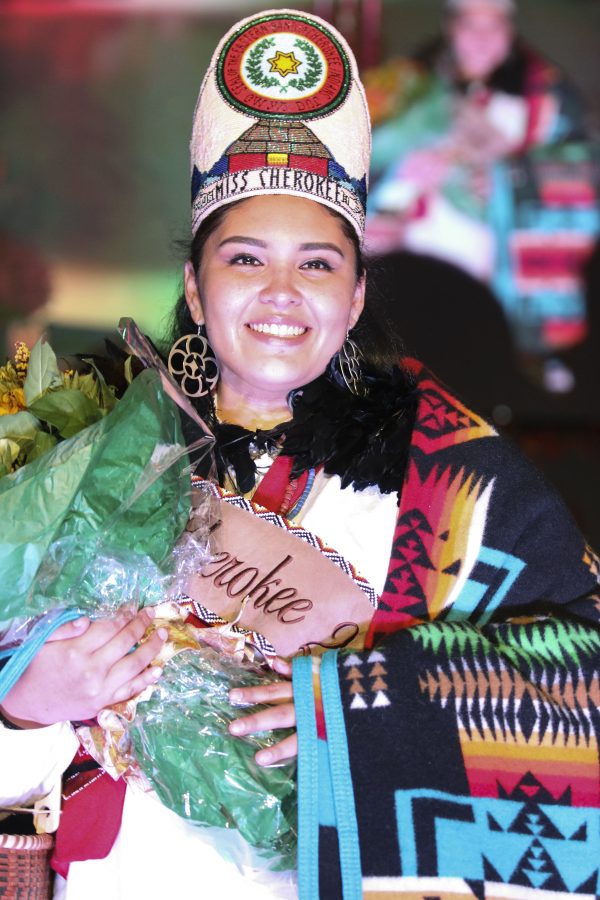 On the first night of the 106th Cherokee Indian Fair, Mystikal Spirit Walela Armachain was crowned the 52nd Miss Cherokee.  Armachain, 18, a member of the Deer Clan from the Big Cove Community, won the pageant held on the beautiful fall evening of Tuesday, Oct. 2 at the Cherokee Indian Fairgrounds.

Armachain spoke about the drug recovery efforts in the community for her platform and said she has teamed up with the RezHOPE group in the past few months.  “We went throughout the community to raise awareness for our future.  I know what it’s like to come from a family of drug addiction.  Believe me, it was not easy at all.”

She went on to say, “I want to make a change for our younger generation to understand that we are better, stronger, and braver than any drug that could harm our people.  We will stand for drug recovery to build a better future for our people, for our Tribe…” 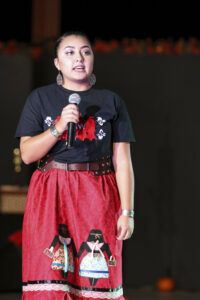 IMPORTANT MESSAGE: Wearing a red dress in their honor, Melah Perkins speaks about the importance of awareness of the Missing and Murdered Indigenous women movement.

Perkins began her platform speech on Missing and Murdered Indigenous Women (MMIW), “Four out of five Native American women experience violence today.  This is a scary statistic that should not be taken lightly.  But, unfortunately, in the United States it is.  In Washington state, Native Americans make up 2 percent of the population but make up 5 percent of the missing persons cases.  I strongly believe that it is way past due that the public be aware of these horrific statistics.”

“Honor and respect, I associate these words with our tribal elders,” said Jumper who spoke on the importance of caring for the elderly in the Cherokee community.  “Our senior citizens have knowledge that is imperative to our culture and traditions.  Tribal elders are the reason we are here, and we owe them our thanks.”

She added, “We, as Cherokee people, need to realize that our elders carry our most important information regarding our past our future.” 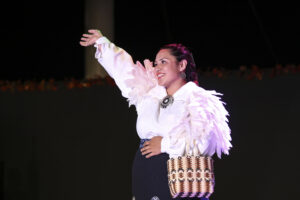 TRADITIONAL: Brianna Jumper models her 1700s Cherokee outfit. She was named second runner-up and Most Photogenic in the pageant.

The talent portion of this year’s pageant was varied with Armachain playing a traditional flute and telling the origin story of the flute, Perkins performing the Cherokee Knee-Deep dance, and Jumper demonstrating how to properly clean a fish.

All former Miss Cherokees were also honored on stage during the event. Armachain was also named Miss Congeniality and Jumper won the Most Photogenic Contest.