While the decision to open a casino on tribal land in Cherokee County was a controversial one, it was a decision that has paid off for the tribe. As the Harrah’s Cherokee Valley River Casino celebrated three years of operations, it has done exceptionally well, and it has exceeded expectations.

Michael Fisher, advertising and public relations supervisor for Harrah’s Cherokee Casinos, said the combined casinos are 1.6 percent ahead of revenue plan and 5.2 percent ahead of distribution planned for the year. Fisher declined to provide an actual percentage over projections for the Valley River property alone.

According to Fisher, the Valley River property experienced revenue growth of 9.7 percent through August compared to 2017, and in that time it saw an increase of more than 18,000 visitors.

As it was being proposed, supporters argued that the location, just off of U.S. 64/74/129, provided mostly four-lane access from Atlanta and Chattanooga, Tenn. It would not only add to the per capita disbursements to tribal members, but it would lift a county struggling with unemployment and economic despair. 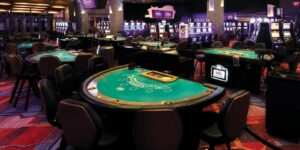 The casino and its employment haven’t just improved the county’s economics, they’ve contributed volunteer work toward the betterment of the county. Employees gave 33,000 volunteer hours in the past fiscal year with such projects as road side clean ups, work at a thrift store to help victims of domestic violence, work to help a housing facility for dementia patients, work at the Valley River Humane Society, blood donation drives and Toys for Tots runs, according to Valley River General Manager Lumpy Lambert.

Opponents were concerned with the added debt to taking on such a project, possible cannibalization of the casino in Cherokee, and they were skeptical as to how well the additional casino would perform.

Tribal Council approved the project March 7, 2013, and then Principal Chief Michell Hicks ratified the resolution. Painttown Rep. Terri Henry was the sole vote opposed to the resolution. Henry didn’t respond to a request for comment by press time.

The casino, with more than 940 employees, has provided a much-needed boost to Cherokee County’s economy. It also has benefitted tribal members’ per capita payments with steady increases since the property opened.

Cherokee County Manager Randy Wiggins said that while he couldn’t specifically cite numbers that were directly attributable to the casino’s operations, “We know there has been some impact.” Sales tax and hotel tax particularly have been impacted, according to Wiggins. “We know a good portion of that has been the casino.”

The casino has performed so well, and contributed so much, that the Cherokee County Chamber of Commerce has named it Business of the Year.

“We were recently recognized as the 2018 Business of the Year by the Cherokee County Chamber, which really drives home for us that yes, all our efforts are paying off, and we’re doing good by this community,” said Lambert. “I’m very proud of every single one of our employees and grateful to be part of a team of great service professionals.”