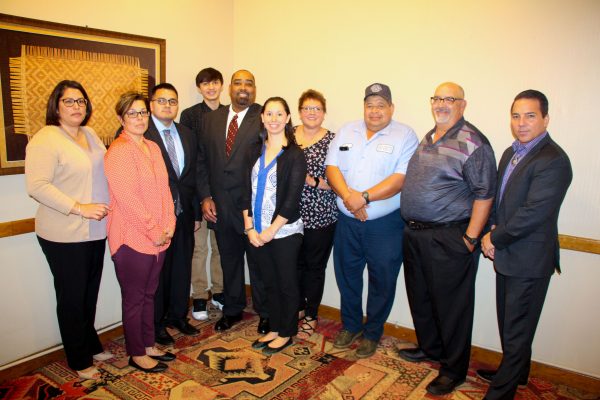 The Cherokee Boys Club installed its new Board of Directors on the morning of Monday, Oct. 1 in an event at the Chestnut Tree Inn.  Tara-Reed Cooper, Tiffani Reed, Benny Graves, Ashford Smith, and June Wolfe took the Oath of Office, administered by Principal Chief Richard G. Sneed, as family members and friends held the Bible for them.  The Board members will serve from Oct. 1, 2018 to Sept. 30, 2020.

“The Cherokee Boys Club has been a hub of our community for over 70 years,” said Chief Sneed  who praised the work put in by Ray Kinsland, retired Boys Club general manager, over the years.  “Ray is a pillar of the community, and the Boys Club was his passion.  The Tribe, and the people of our Tribe, were and still are his great love.”

He told the Board that there will be challenges ahead.  “Because of laws and policies that are in place that require insurance to be provided for, the cost of doing business has increased dramatically.  The challenges that we face, as leadership, both with the Tribe, the Club, the hospital, the school, all of the service areas for our Tribe; we’re going to have to be extremely diligent in our work.  We’re going to have to be conservative in our decision-making.”

Chief Sneed, a former teacher at Cherokee Central Schools, told the crowd that he is always grateful for the benefits he has and said he used to tell his students, “The best thing that you can do when you graduate high school is take full advantage of the Higher Education program that the Tribe provides for you.  Leave.  Go get your education, and then stay gone for about five years.  Go live out in the world.  Have a mortgage.  Pay property taxes.  Pay to have your trash removed.  Pay co-pays on an insurance policy when you go to the doctor.  Pay co-pas on pharmaceuticals when you go to the drug store.  Pay for your propane.  Pay for all the things that everyone else in the world has to pay for, and when you come back you will see clearly how blessed we are to be members of the Eastern Band of Cherokee Indians.”

He added, “And, I told them if you don’t do that then everything that we have here as a blessing will become an entitlement for you and you will be worse off for it…moving forward from this point, I would challenge each and every one of us to search you own heart and your own mind about how we view the blessings that we have.”

Vice Chief Alan B. Ensley said he’s been involved with the Cherokee Boys Club and the Board since high school.  “I know the importance of this role.  Going forward, I know you’re all going to have a hard row to hoe to get started, but the Boys Club motto is ‘By Prayer and by Work’.  I thank you for your service.”