LAURINBURG – Members of a group who identify themselves as the “Tuscarora Nation” faced charges Monday, July 23 of gambling, manufacturing controlled substances, and money laundering at illegal casinos in Maxton, Pembroke, and Red Springs. Vehicles, currency, marijuana, firearms and more than 200 illegal gaming machines were seized during the raids.

More than 26 people were arrested following a year-long multi-agency investigation that found the group operating three illegal casinos, an unlicensed police force, and an indoor marijuana grow with multiple outdoor grows. The group was also making threats of war against law enforcement. 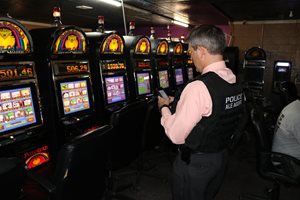 “Citizens living near the casinos complained of the illegal activity taking place and notified law enforcement,” said Terrance Merriweather, head of N.C. Alcohol Law Enforcement, the agency that executed Monday’s search warrants. “This group openly expressed beliefs that neither the laws of North Carolina nor the United States applied to them, putting law-abiding citizens in danger. We hope today’s arrests provide a safer community for them.”

The Robeson County Sheriff’s Office, the U.S. Department of Homeland Security Investigations and the U.S. Bureau of Alcohol, Tobacco, Firearms and Explosives worked with ALE on the year-long operation.

The casinos had one-arm bandit, Pot of Gold, and other illegal gambling machines housed in blacked-out buildings with no clocks. The casinos operated 24 hours a day, seven days a week and all had heavily-armed security who were not only unlicensed, but using blue lights in their trucks. 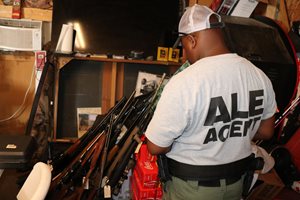 Those arrested include, Kendall Locklear; his son, Kendrick; the armed personnel at the casinos and other casino employees. Robert Chavis was arrested for two stolen guns.

“Most of the offenders arrested today were considered to be armed and dangerous and many have criminal records,” said Robeson County Sheriff Kenneth Sealey. “People living in those towns were scared of the activities taking place around the casinos. At the end of the day, this operation is all about community betterment.”

This is an on-going investigation. 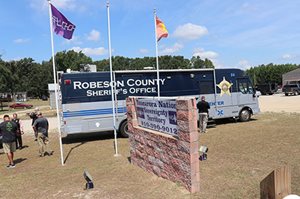